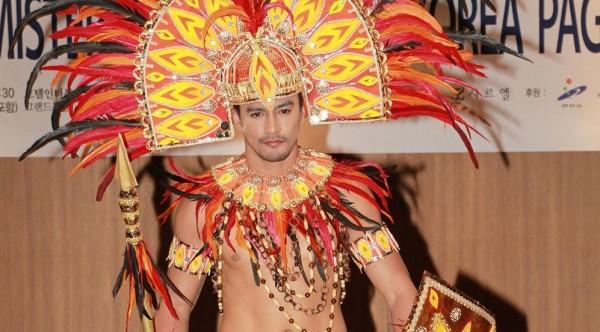 MANILA, Philippines – The batchmates of Police Officer 2 Mariano Flormata, a.k.a. Neil Perez, who were among the 44 Special Action Forces killed in the Mamasapano encounter, might have heard his prayers.
“Even before the tournament, he said he’s offering this to the 44 men to recognize their heroism. Maybe the SAF 44 heard him from heaven,” PNP spokesperson Chief Superintendent Generoso Cerbo Jr. said Monday.
Flormata reigned supreme in the male pageant in Seoul, South Korea and bagged the Mister International title on Saturday night.

Earlier Flormata, an Explosives Ordnance Disposal technician of the PNP Aviation Security Group, said he is dedicating his title to the 44 members of the SAF killed in a police operation in Mamasapano, Maguindanao.

Seven of the slain SAF troopers were Flormata’s classmates in basic training at the Police National Training Institute in 2008.

The PNP is also mulling over giving the bomb-defusing policeman assigned at the Aviation Security Group an accomplishment award.

“As of now, the board is still deliberating but he is entitled to an award because of his extraordinary and outstanding accomplishment,” Cerbo said.

But his superior, Avsegroup head Chief Superintendent Christopher Laxa, earlier said Flormata has “lost his focus” and might perform well if he would be assigned to the Police Community Relations Group.

For the PNP’s part, they do not see anything wrong with Flormata’s budding modeling career as long as it will not adversely affect his performance as a police officer.