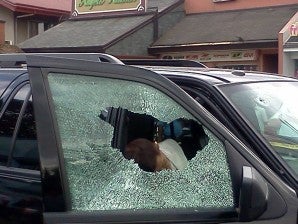 CRIME IN BROAD DAYLIGHT. A Korean national, Hyung Hur, is slumped on the front passenger seat of his vehicle after he was shot and killed along Ortigas Avenue Thursday, Sept. 29, 2011. His Driver, Mark Casayuran was rushed to the nearest hospital. RUEL PEREZ/Radyo Inquirer 990AM

MANILA, Philippines – A foreigner, identified as a Korean national, was shot dead while his driver was hurt after they were ambushed by motorcycle-riding suspects in Ortigas Avenue Thursday, police said.

Hyung Hur, 59, a Korean businessman, and his driver, Mark Anthony Casayuran, were about to park the black Ford Expedition (HUR 33) they were riding in near a coffee shop along Connecticut Street around 8:30 a.m. when two suspects on board a motorcycle attacked them, said Senior Superintendent Ranier Espina, chief of the San Juan City police.

Hur died after sustaining several gunshot wounds while Casayuran was rushed to the nearest hospital, he said. Hur’s body was taken to the Arch Michael Funeraria, said Espina.

Meanwhile, the Metropolitan Manila Development Authority said that the eastbound lane in Ortigas was closed to traffic because of the shooting.