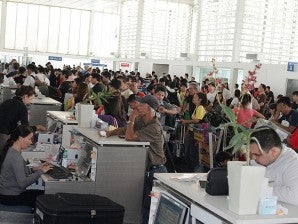 Philippine Airlines resumes operations a day after thousands of passengers were stranded after the flag carrier’s workers staged a paralyzing strike in a last-ditch effort to save their job. JESS YUSON/ INQUIRER PHOTO

MANILA, Philippines — Senate President Juan Ponce-Enrile has asked the government to enforce the law and not be “soft” and “charitable” on employees of the Philippine Airlines (PAL) who staged a wildcat strike Tuesday.

“It’s up to the evaluators of the facts to determine whether there’s a probable cause. If there is, by all means, we will enforce the law,” Enrile said on Thursday.

“Alam mo sa mga ganitong bagay, we’re too proned to be so soft and charitable. We have to enforce the laws in order to have a well order society. It can’t be otherwise,” he said.

Enrile stressed that nobody was immune and above the law.

The Senate leader did not also object when President Benigno Aquino III himself expressed the possible filing of economic sabotage against the PAL employees.

As the flag-carrier of the Philippines, PAL involvement in any case will have an impact on the image of the country, Enrile said.

“Naturally,there are many people stranded here, people going out of the country not only Filipinos but foreigners. That created a very bad impression on the world,” he said of the Tuesday protest by the employees.

Enrile still believes that the conflict between the PAL union and its management should be best addressed through the intervention by the Department of Labor and Employment.

Read Next
Plan to blow up Pentagon bared–US authorities
EDITORS' PICK
Metro Manila to remain under COVID Alert Level 2 until December 15
IATF tightens border control, suspends entry of fully vaxxed nationals from ‘green’ countries
Villar Group gears up for AllValue Shopping Party on Dec. 3; around P 1-million promos and discounts up for grabs
Duterte open to making jabs mandatory; Cabinet mulls ‘pressuring’ the unvaccinated
Legarda: Ending Violence Against Women, a cause for all
A delightful blessing!
MOST READ
Quiboloy warns of ‘much worse than Omicron virus’ if his ‘persecution’ is not stopped
Omicron poses ‘very high’ global risk, countries must prepare–WHO
Marcoleta defends pol ads on ABS-CBN
Bongbong Marcos’ conviction in tax case not a crime involving moral turpitude — lawyer
Don't miss out on the latest news and information.