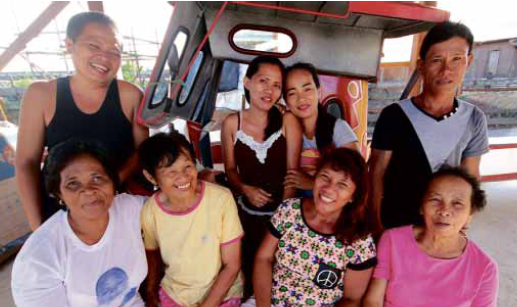 LONELY HEARTSNOMORE? Widows and widowers of Supertyphoon “Yolanda” from Cogon village, Palo town, Leyte province, comprise a support group for each other. They meet every Friday to share laughter, sad and funny stories, and meet their future lifetime mates. DANNY PETILLA/CONTRIBUTOR

PALO, Leyte—They meet every Friday. And they are on Facebook.

Saying they are over their grief and heartaches, widows and widowers who lost their spouses to Supertyphoon “Yolanda” (international name: Haiyan) 15 months ago have formed a club. Their objective: Find a lover quick by Valentine’s Day.

And if “hits” and “likes” on Facebook are to take the place of Cupid’s arrow, then certainly their club—known as the Yolanda Lonely Hearts Club (YLHC)—has generated enough interest and curiosity with more than 2,100 “friends” so far as of Friday.

“Our grief is not forever. We will learn to love again,” said Evelia Tanola, the 59-year-old president of YLHC, a social club formed last December to provide a network of support for more than 30 grieving Yolanda widows and widowers, mostly fishermen and fish vendors from Barangay Cogon here.

Cogon, a coastal village of more than 3,200 people, became the locus of grief when the storm killed 158 villagers, making widows and widowers of more than 70 surviving spouses.

“Losing our loved ones to Yolanda was the worst thing that ever happened to us. This club offered us a release from our grief and a way out of our darkness,” said Tanola, a sprightly fish vendor who lost her 59-year-old husband Armando, a rice mill operator.

Some members of the club were lucky enough to find new lovers and, hopefully,   new spouses—with the help of their affiliation with the club.

The club’s success has attracted the interest of other widows and widowers from nearby villages and towns willing to set up similar clubs in their neighborhoods.

“When all of us have found a mate, then there will be no more need for the Lonely Hearts Club,” said Casimero Villas, a 59-year-old widower and member of YLHC.

Villas is set to marry Lorena Maceda, a 41-year-old government employee who he met last year.

A former police chief of this town caught in a series of misfortunes that ended with him losing his entire family to Yolanda on Nov. 8, 2013, Villas will lose his membership in the club and become just an “adviser.”

Unlike Villas, Tanola has been unlucky so far, unable to catch any of Cupid’s arrows. But she is looking forward to a public dance on Friday, where she hopes to meet someone she will like.

“We just don’t know. Cupid might be kind to me this time,” Tanola said with a smile.

At a local dance hall last Valentine’s Day, widow Emelita Abejero realized how much she missed her late husband Arnulfo when she seemed to see him dancing among the living. But it was only his ghostly figure.

“It was him I saw. He taught me how to dance. He was a very good dancer,” said Abejero, a 46-year-old beautician.

In what would have been his wife’s 33rd birthday last Jan. 13, widower Emmanuel Pedrosa was “reunited” with his dead loved ones—wife Eva and 5-year-old daughter Precious—in a dream so vivid he begged God for it not to end.

“The dream was so lifelike. It felt like my wife and baby were just around me,” said Pedrosa, a 38-year-old small business owner.

Abejero’s husband and Pedrosa’s wife and daughter were killed during Yolanda’s violent storm surges that slammed into Barangay Cogon.

Going through a roller-coaster of emotions after the death of their spouses has made Abejero and Pedrosa stronger.

After joining YLHC, Abejero and Pedrosa have found renewed hope from the camaraderie offered by the club.

“I became a more confident person,” said Abejero, who met Eric Schroeder, a 60-year-old retiree from Hawaii, through their Facebook page.

“By being a member of this club, our widows and widowers have reclaimed their dignity and helped themselves overcome the stigma of widowhood,” said Malvarosa Perote, village chief of Cogon, who batted for the creation of the club as early as last year.

“This club allowed them to demonstrate their faith in God by showing their faith in themselves and their fellowmen,” said Mark Daig, a 26-year-old pastor from Ministries Without Borders, the United Kingdom-based evangelical group of 50 Christian churches with local denominations in the Philippines.

As a result of his weekly meetings with the widows and widowers, Daig’s spiritual network of support spurred the beginnings of the club.

The club members are looking forward to their program on Valentine’s Day, where they will dance alone (to the tune of Eric Clapton’s “Tears in Heaven”), while holding a memento, like a portrait, pillow or anything, that will remind them of their dead spouses.

“After that single moment of sorrow, we hope to dance the night away,” Villas said.