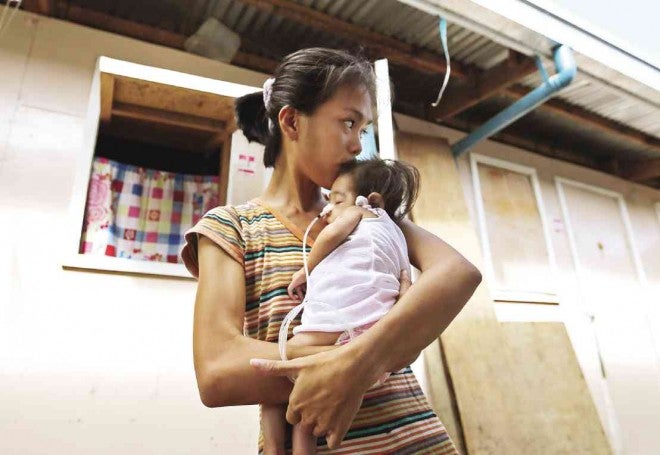 AUTHORITIES have noticed the rise in the number of young mothers in Tacloban City after Supertyphoon “Yolanda” (international name: Haiyan) on Nov. 8, 2013. INQUIRER PHOTO

Teenager Jennalyn should have been in school. But she is now seven months pregnant and is living in with her 18-year-old jobless boyfriend in a bunkhouse for families displaced by Supertyphoon “Yolanda” (international name: Haiyan) in Tacloban City.

“At my age, I am supposed to be still in school or enjoying the life of being a teenager. But I guess, I love him or maybe I just need someone to talk to,” said 15-year-old Jennalyn (not her real name).

Her situation exemplifies what the city population office has noticed as a “pregnancy boom” among young women after Yolanda, which killed at least 2,200 people and wiped out most of the houses, especially those at the coastline, in Tacloban.

The office, however, does not have figures to support its observation.

“Actually, there was this study by an NGO (nongovernment organization) that after a calamity, there was a baby boom. This could be because, (our women) need comfort not only physically but also emotionally and psychologically,” city population officer Cielito Esquibel said.

Catherine Aguilos, owner of a birthing clinic a kilometer away from the bunkhouses in Caibaan District, confirmed that the number of customers rose after Yolanda.

“Before, there were only an average of 18 deliveries in my clinic per month. Now, I have at least 30 deliveries each month,” Aguilos said.

She, however, found disturbing that many of the women are young mothers.

“I just advised them to slow it down, take some time before getting pregnant again or observe birth spacing. Having a baby (often) will not be good to their health,” Aguilos said.

Jennalyn admitted that there were times when she would ask herself if she was ready to settle down with her partner, Renato, especially since she decided to elope with him after surviving the strongest typhoon to hit landfall.

Her parents and nine siblings survived, but the family lost their house in Barangay (village) 88 in the storm surge generated by Yolanda on Nov. 8, 2013. They now live in one of the 27 bunkhouses in Caibaan, along with 512 families or 2,215 people.

Jennalyn stopped attending classes in high school, where she was on second year, because her parents lost their livelihood after the storm. Her father was a pedicab driver while her mother sold vegetables.

At the Eastern Visayas Regional Medical Center, the region’s biggest government-owned facility, the number of childbirths has almost doubled from an average of 10 a day. Almost half of the mothers are young women, according to a hospital staff member, and the youngest is 14 years old.

At present, 108 women living in the Caibaan bunkhouses are pregnant, said camp manager Rowena Paraiso. “While it is their personal decision (motherhood), what we do is to explain to them the responsibilities of being a parent,” Paraiso said.

Psychiatrist June Pagaduan Lopez explained that the increase in the number of pregnant women after a disaster was expected. Lopez is based in Manila but is often in Tacloban, particularly in San Jose District, to help storm survivors cope with trauma.

“Sexual aggressiveness” is noted among male survivors of a disaster, which results in the rise of pregnancy rate, Lopez said. “They have nothing much to do. Walang alak (No liquor). Walang sugal (No gambling). That is why they become sexually aggressive,” she told the Inquirer in a phone interview.

Women, especially those in their teens and early 20s, choose to elope with their partners to seek the comfort they cannot find from their parents. This apparently happened to Jennalyn.

The pregnant teenager said she knew Renato had no job when she eloped with him. She wants to have someone who would assure her that no harm would fall on her following her experience during Yolanda, she said.

Jennalyn met Renato, an evacuee from Barangay San Jose, in the Caibaan bunkhouse. A close friendship led to romance, and they eloped in February last year.

The girl is now staying in the bunkhouse unit occupied by Renato’s family in Caibaan.

The couple relies on food ration being supplied by the Department of Social Welfare and Development.

Asked if she was ready to be a mother, Jennalyn said “yes.” She, however, gave a half-smile and fear showed in her eyes.

Lopez said there is a need to educate the female survivors, especially the young women on the repercussions of having early pregnancy. Unfortunately, family planning has not been a priority in Tacloban since efforts are focused on the survivors’ immediate needs, such as housing and livelihood.

Esquibel said her office has stopped conducting family planning interventions after Yolanda. These included counseling on premarital sex, which stalled after some of the volunteers died during the typhoon, or left Leyte.

This month, the city population office will conduct a survey on each of Tacloban’s 138 barangays, including those staying in bunkhouses and temporary shelters, to determine the actual city population.

Although she is only 15, Jennalyn said she would look for a job to help put food on the table, as well as save money for her baby’s education.

“We did not finish school. It’s my wish to see my baby have a life that is better than what we have experienced,” she said.