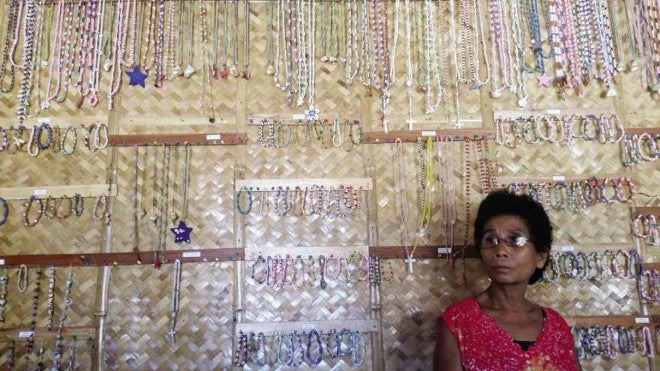 DELSA JUSTO, chief of the Ati tribe of Boracay Island, shows the accessories being sold by the tribe. NESTOR P. BURGOS JR.

Delsa Justo has spent most of her life fighting for the ancestral land of the Ati tribe on the world renowned island-resort of Boracay in Malay town, Aklan province. Today, she is smiling as she proudly displays boxes of bath soap, made from either papaya or calamansi extracts, at the livelihood center in the Ati Village in Barangay Manoc-Manoc.

“We hope many tourists will buy these,” Justo says, describing the products as the result of an ethnic labor of love.

The Ati people have embarked on soapmaking and other livelihood projects to support themselves.

“We still have many problems even if we already have a village here,” Justo said. “But this (soapmaking) is one way we can help ourselves.”

The Boracay Ati Bath Soap is produced by the Boracay Ati Tribe Organization (Bato), composed of about 40 families on the 1,032-hectare island. Its members attended a series of livelihood training activities held with the assistance of Assisi Development Foundation Inc., a nongovernment organization.

The training programs began in December 2013, after the tribe members occupied portions of a 2.1-hectare lot at the southern end of Boracay, which is covered by a certificate of ancestral domain title.

The National Commission on Indigenous Peoples issued the title to the tribe in August 2010, despite the opposition of property claimants with business interests. The agency and several anthropologists have supported the Ati people’s right to the land as the earliest settlers on the island but have been displaced and driven away since the 1970s when its beauty became known and attracted tourists.

According to a study conducted in 2006 by anthropologist Alicia Magos, a retired professor of the University of the Philippines Visayas, the Ati people have been there long before the earliest Visayan migrants came and before the Spanish colonial government reached them.

Ati elders derived the island’s name from “bora (bubbles)” and “bocay (white)” because they were amazed by the white sand grits resembling water bubbles. 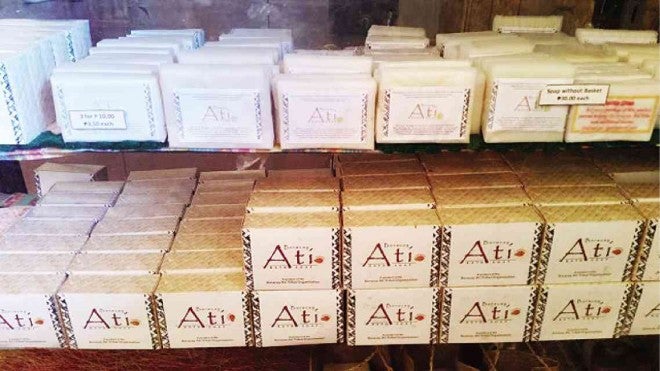 THE ATI tribe of Boracay has started selling bath soap to resorts and tourists to support themselves. NESTOR P. BURGOS JR.

When the tourists started coming in the mid-1970s, the lives of the Ati people changed radically. Now, most of the men work in resorts as carpenters or utility men, while the women render laundry services.

As the tourism industry boomed, the Ati people were continuously threatened with eviction until the national government recognized their ancestral domain claims.

Hopefully, Justo said soapmaking and other livelihood projects would help them support themselves.

It takes at least three hours to mix and prepare the ingredients and to mold the soaps. These are cleaned after airing out the molded soaps for about a month.

A bath soap costs P40 while the hand soap is P3.50. Bato members who are directly involved in the soap production receive 10 percent of the sales at the livelihood center, while the rest goes to the community fund.

The soaps are also packaged in woven baskets and have become a hit among tourists, especially Koreans.

Resorts and hotels, including those operated by Europeans and Koreans, are also placing orders, said Sr. Ma. Flor Jalmasco, coordinator of the Holy Rosary Parish Ati Program. Jalmasco and other nuns belonging to the Daughters of Charity of St. Vincent De Paul are running the program.

Bato members also produce and manufacture accessories for tourists, such as bracelets (P25 each), necklaces (P100) and anklets (P30).

Supporters have also donated a motorboat that can carry at most 10 people. The tribe plans to offer boating services for tourists as another income generating project, Justo said.

The Boracay Ati Tribal Organization may be reached in the Ati Village in Barangay Manoc-Manoc, Boracay +62 36 2882623