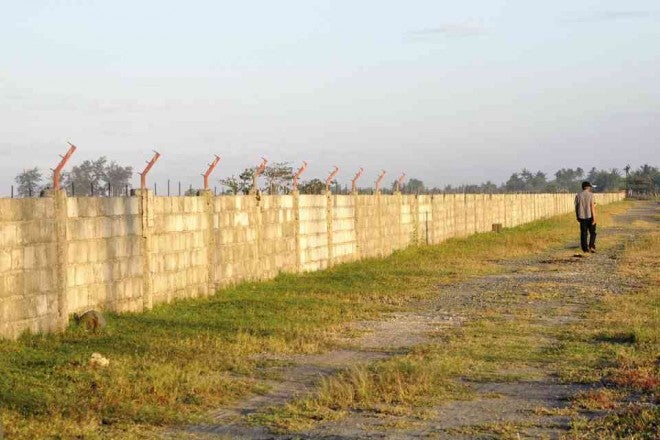 THE 3-KM wall that had fenced off blacksand mining in Lingayen, Pangasinan. CONTRIBUTED PHOTO

LINGAYEN, Pangasinan—Rolando Rea, 72, a retired government employee, longs for the day that he can go to the beach of his coastal village of Estanza in this Pangasinan capital.

“My eyesight is poor because of glaucoma. I cannot see beyond two meters now. I will be happy to see the sea again before I go blind,” Rea said as he walked beside a six foot-high wall that bars residents of coastal villages in Lingayen to reach the sea.

Unless he steps on large rocks or a ladder, the sea is beyond his sight.

If residents want to go to the beach, they have to walk where the wall ends. The bolder ones use ladders to cross over the wall.

“The sea is a source of livelihood for poor residents. They use daklis (small nets) to catch fish and collect driftwood to use as firewood,” Rea said.

The area is also site of an ecotourism project of the provincial government.

The extraction of black sand, a highly valuable mineral used for industrial purposes, and the operation of the mineral processing plant have stopped. Trucks that hauled black sand and the barge that residents said ferried the mineral are also gone.

The only evidence that black sand mining activities occurred there is the leftover pile of black sand, already overgrown with weeds, in Malimpuec village.

Rea has petitioned the Department of Environment and Natural Resources (DENR) to remove the 3-km concrete wall. A copy of the petition was sent to the Ombudsman.

Rea, in a letter on Jan. 23, asked Environment Secretary Ramon Paje to help residents of the villages of Estanza, Sabangan, Maimpuec and Capandaan by removing the wall.

He said security guards are posted there, preventing residents from accessing the sea.

Joel Salvador, Environmental Management Bureau director in the Ilocos region, earlier said his agency did not know about the wall construction. He said the DENR central office issued an environmental compliance certificate for a golf course that was part of an ecotourism project in the area.

“Public land should not be walled. Where did the money to construct the wall come from? What was the wall for? If it is part of the golf course, there should be a corresponding permit for it,” he said.

The Inquirer tried to get the side of provincial officials, but provincial information officer Orpheus Velasco said an earlier interview with Vicente Oliquino, head of the Aro mo ako Sambayanan (Aromas), a group that opposed black sand mining in Lingayen, would suffice as a reply.

In that interview on Oct. 26 last year, Oliquino said residents had no problem with the construction of the wall and fencing of the site for ecotourism.

“That is for security. The ecotourism area must really have a fence,” he said in that interview.

The interview was made part of the motion for reconsideration filed by Pangasinan Gov. Amado Espino Jr., provincial administrator Rafael Baraan and Alvin Bigay, head of the provincial housing and development office.

The motion was filed after the Office of the Ombudsman issued a resolution on Oct. 23, 2014 dismissing Baraan and Bigay for grave misconduct for black sand mining in Lingayen.

The two officials also face a graft case filed by the Ombudsman against several Pangasinan officials, including Espino, for allowing black sand mining.