MANILA, Philippines–It’s also “painful” for the Moro Islamic Liberation Front to see the Special Action Force being brutally shot by an alleged Moro rebel shown in a viral video. 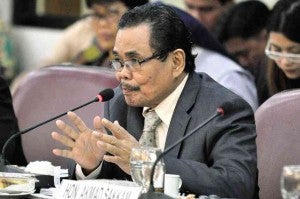 Iqbal said this during the interpellation of Senator Paolo Benigno “Bam” Aquino IV, who later asked Philippine National Police officer in charge Deputy Director General Leonardo Espina to air his side on the matter.

Aquino said that he, with the public, were “brought to tears and moved by his impassioned statement” in the hearing at the House of Representatives on the encounter that killed 44 policemen.

(You know, just like what I have been telling you, I have love put myself in the shoes of those searching for justice. From that, they will already know what the families are looking for and we’ll have a good perspective of what real justice are we seeking.)
Espina earned the sympathy of the public after he broke down in tears while expressing frustration over the investigation on the bloody encounter that took the lives of 44 of his men.

(We all want to know the truth. Those who are at fault need to be punished. We can no longer bring the victims of injustice back to life.)

He also thanked Iqbal for heeding to the calls for his presence in the hearing.

“Maraming salamat po. I hope magsama-sama po tayo, 44 po ang aming patay sabi niyo po sa inyo 18 (Thank you. I hope we can cooperate with each other as 44 of our men died, while 18 of your men died). So, we seek justice for our people.”