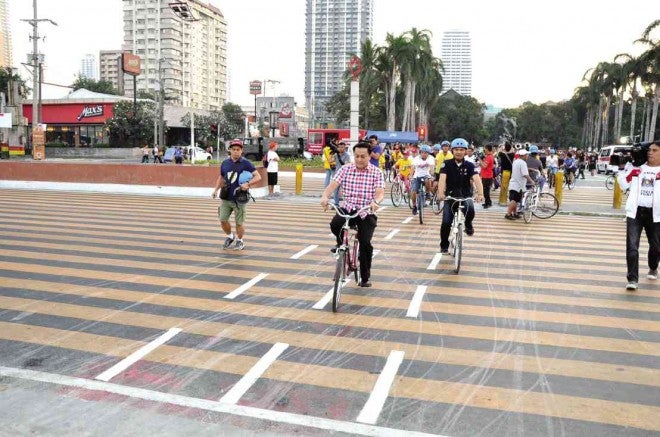 MANILA, Philippines—To promote biking as a form of exercise, the Metropolitan Manila Development Authority (MMDA) on Monday opened another bike lane on Roxas Boulevard in Manila from Rajah Sulayman to Burgos Avenue.

MMDA Chair Francis Tolentino, who spearheaded the launching, said anyone with a valid identification card could borrow free of charge a bicycle from the bike shelter setup near the Rajah Sulayman Park. Cyclists can also leave their bikes at the shelter without fear of these being stolen.

“As we all know, regular cycling has many physical and mental health benefits. It is also fun, cheap and good for the environment,” Tolentino added.

The launching also kicked off the start of the “Bayanihan sa Daan,” a road-sharing project in which people can walk alongside bikers and motorists from the Quirino Grandstand in Manila to Mall of Asia in Pasay City.

The bike-sharing initiative is part of the MMDA’s “Bike-Kadahan” project which started in March last year to promote bicycles as an alternative mode of transportation and at the same time, provide a safe parking spot for bikers.

It opened a bike lane on the northbound lane of Edsa from Magallanes to Ayala in Makati City. Two more followed in Quezon City: from Ortigas to Santolan (northbound) and from White Plains to Temple Drive.

The MMDA also introduced the Bike-Kadahan project on the Ateneo de Manila University campus in October in a bid to ease traffic in the area.

MMDA General Manager Cora Jimenez earlier said that the MMDA was planning to open more bike lanes to connect the different cities in the metropolis.

“We are continuously studying those plans because we also want to provide safe and unobstructed areas for bikers,” she added.

Aside from the bike lanes in the Bike-Kadahan areas, the agency also opened several others, including Remedios Circle in Malate, Ortigas in Mandaluyong City to Santolan in Quezon City, Commonwealth Avenue from University Avenue to Tandang Sora in Quezon City, and Marcos Highway from Evangelista Street to Sumulong Highway in Marikina City.