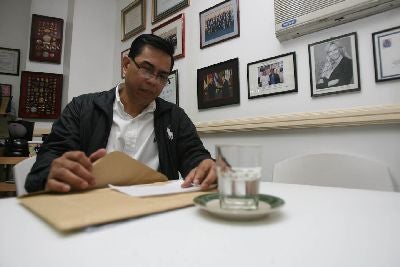 Fugitive former police Senior Supt. Cezar Mancao II, came out in the media Sunday to again say he was planning to surrender and to finally tell the truth.

Mancao, who was one of the accused police officers in the 2000 murder of publicist Dacer and Corbito, has been the subject of a National Bureau of Investigation manhunt since escaping from NBI custody in 2013.

In an interview with select media on Sunday, Mancao, a former intelligence officer who was initially considered to be a government witness in the case, apologized to former Sen. Panfilo Lacson and deposed President and now Manila Mayor Joseph Estrada for implicating them in the double murder. He also apologized to De Lima who he said had to spend time and resources to hunt for him.

Come clean, surrender “on my terms” and don’t waste our time.

This was the terse message from Justice Secretary Leila de Lima to the “flip-flopping” Mancao.

“I hope that if Mancao does in fact resurface, he comes clean this time. He must tell us the plain and naked truth about that still unresolved mystery which is the Dacer-Corbito murder case,” De Lima said in a text message to reporters on Sunday.

“That’s the only way for Mancao to redeem himself, given his lost credibility borne by his flip-flopping and contradictory statements and testimonies,” she said.

De Lima said Mancao must face his long-delayed trial once he resurfaces, and tell the court who should pay for the double murder.

“… [H]e has to contend with the criminal case wherein he remains to be an accused. He must face the trial squarely and prove the innocence of those truly innocent and the guilt of those truly guilty,” De Lima said.

She said people representing Mancao had contacted her, and that she had sent word back to him that he will not be allowed to set the terms of his surrender.

“Someone already called me. I relayed the message that if he really wants to surrender to me, my condition is for him to come clean this time and not waste our time,” De Lima said.

“And his surrender must be on my own terms, and not his. As a fugitive, he cannot be dictating the terms,” she added.

De Lima said the NBI is continuing the manhunt for Mancao. “Whether or not such surrender materializes, the NBI shall continue to hunt him down since he’s a fugitive from justice,” she said.

In radio and television interview, Mancao said that he had been touched by Pope Francis when the latter visited the Philippines last month, and had decided to come clean and apologize to those he implicated in the Dacer and Corbito murders.

Reacting to Mancao’s recantation and apology, Estrada on Sunday said he felt vindicated.

“It’s good that the truth finally came out,” he said.

Estrada said he could not imagine ordering the killing of Dacer who he said was one of his closest friends and kumpare, as they both stood as godfathers to each other’s children.

He said he was accepting Mancao’s apology. “We all make mistakes … It’s good that Pope Francis has touched him,” he said.

“I’m a very forgiving person. I’ve forgiven many people who have done me wrong,” Estrada said, citing his reconciliation with the late President Corazon Aquino who participated in the movement that culminated in the Edsa People Power II uprising that led to his ouster in 2001.

“He should tell the truth. We don’t know, he might have been framed or something. He should face the charges against him,” Estrada advised Mancao.

Lacson, who was cleared of any liability in the double murder by the Court of Appeals—the ruling was later upheld by the Supreme Court—said he has already forgiven Mancao and the others who accused him of perpetrating the killings.

He said Mancao had credibility issues. “More than the persecution of innocent people, what Mancao did four years ago [when he accused Lacson of the murders] spoke of his weak character,” Lacson said.

“Surely, I know all those who committed incriminatory machination, even subornation of perjury by the assigned prosecutor herself and I will never forget their names. Regardless, I have already forgiven all of them. In a way, I thank them for letting me know who my true friends are,” he said.

Lacson, who evaded arrest by fleeing the country and going into hiding for more than a year, claimed that with Mancao’s latest statements it was clear that the previous Arroyo administration had been “out to get him.”

The former policeman and ex-senator made his political reputation through the sensational exposés he made on the Senate floor of the alleged wrongdoing of the Arroyo administration, including accusations of money laundering against Jose Miguel Arroyo, the husband of former President Gloria Macapagal-Arroyo.

“At least he makes clear what I’ve already known since the start of my ‘calvary’ that the minions of the former President ganged up on him to do me in. Why? I can only presume that my incessant exposés against the previous administration’s abuses against the Filipino people had everything to do with it,” said Lacson.–With a report from Nathaniel R. Melican

CA denies Mancao plea to be cleared in Dacer-Corbito case