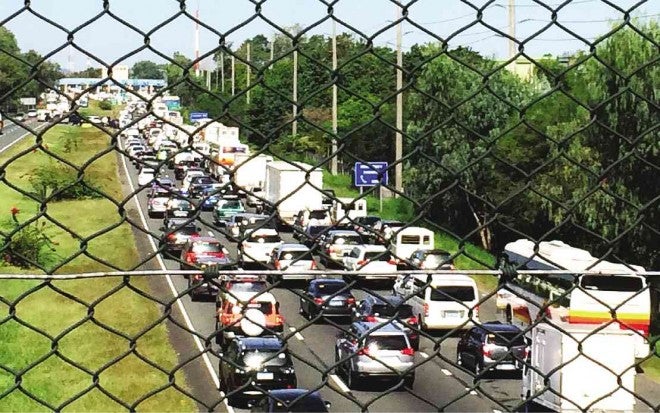 Drilon witnessed the signing of agreement on the North Luzon Expressway (NLEx) and Subic-Clark-Tarlac Expressway (SCTEx) integration held at the Senate on Thursday.

The agreement was the result of the Senate leader’s complaint about his ordeal last Dec. 26 when he was trapped in traffic for more than 11 hours on his way to Baguio City.

“I turned this crisis into an opportunity by encouraging the BCDA and MNTC to hasten the integration of these two roads …” Drilon said when he spoke after the signing of the agreement.

“This happy development is expected to happen before the year ends following the signing of the NLEx-SCTEx integration agreement,” a joint statement from BCDA and MNTC said.

The integration, they said, would be implemented by the MNTC at an estimated cost of P650 million.

MNTC president Rodrigo E. Franco said the integration would provide motorists with a more seamless travel experience along the NLEx and the SCTEx.

“The toll collection technology that is available to NLEx motorists will now be used along the SCTEx, making travel faster and more efficient,” he said in the same statement.

BCDA president Arnel Paciano Casanova, meanwhile, said the integration was in line with BCDA’s vision to facilitate the movement of people and goods to and from the three key economic zones of Central Luzon—Subic Bay Freeport, Clark Freeport Zone and Central Techno Park in Tarlac.

“The SCTEx was built to transform Central Luzon into a world-class logistics hub in the Asia-Pacific region,” he said. “The integration of the tollway systems which will provide a direct and seamless connection between Central Luzon’s main economic zones and the big markets of Metro Manila will help bring us closer to this goal.”

MNTC said some toll barriers and toll plazas would be removed or transferred to pave the way for the integrated system.

Drilon: Collect toll only once