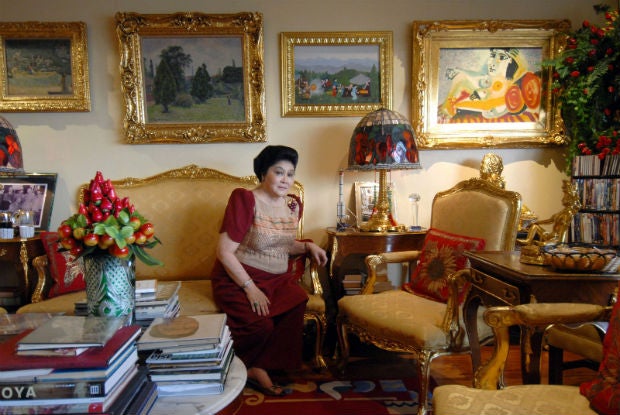 This file photo taken on June 7, 2007 shows former first lady Imelda Marcos is seen in her apartment in Manila with a gallery of paintings including a Picasso, seen at upper right. AFP FILE PHOTO/ROMEO GACAD

MANILA, Philippines–The Sandiganbayan has ordered the transfer of 13 paintings seized from the Marcos family to the custody of the National Museum after their present custodian, the Bangko Sentral ng Pilipinas (BSP), said it did not have the expertise to keep and maintain them.

In a Feb. 2 resolution, the antigraft court’s Special First Division named the National Museum as the official repository of the paintings that the National Bureau of Investigation (NBI) seized last September from the Marcos family’s San Juan City house.

The BSP also told the court it could not vouch for the authenticity and genuineness of the artworks, that include paintings ostensibly by European masters.

It said it had no suitable long-term storage plans for the paintings, some of which were showing signs of damage and deterioration.

The paintings, which were stored in BSP’s Compartment No. 12 after they were turned over by the NBI for safekeeping, are the subject of a pending case against the Marcoses who are alleged to have acquired them using embezzled state funds.

In September, the antigraft court issued a garnishment order on 156 pieces of artwork by European artists after declaring them to be part of the ill-gotten assets of the late dictator Ferdinand Marcos and his family.

The court agreed with director Jeremy Barns that the National Museum, which had filed a manifestation, “has the technical, curatorial and organizational expertise needed to properly care for and manage the subject paintings.”

Barns told the court the museum could assist the Presidential Commission on Good Government (PCGG) and the Sandiganbayan in preserving the artwork while under the custody of the court until the ownership dispute shall have been resolved.

Nine other paintings displayed in the office of Ilocos Norte Rep. Imelda Marcos, the dictator’s widow, in the House of Representatives were also seized by court sheriffs.–Cynthia D. Balana