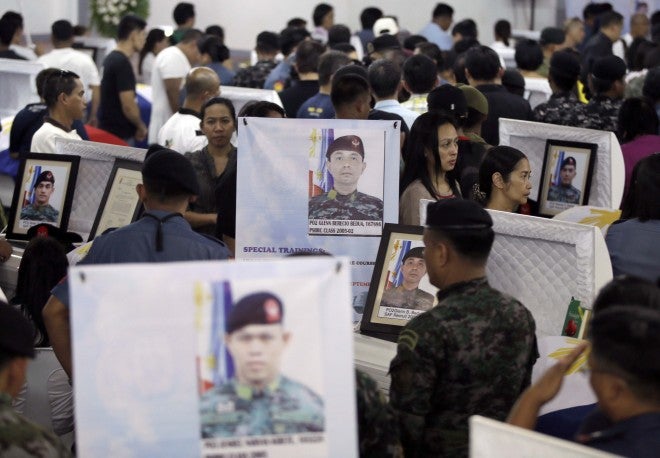 Mourners pay their last respects to the 44 police anti-terror commandos who perished last Sunday during the Philippines’ biggest single-day combat loss in recent years, at Camp Bagong Diwa, Taguig City, on Friday, Jan. 30, 2015. In their last moments before Moro rebels mowed them down, the ill-fated commandos phoned and texted relatives and friends, pleading for help, asking them to tell their superiors that they had been surrounded and that they needed reinforcements. AP PHOTO/BULLIT MARQUEZ

MANILA, Philippines–In their last moments before Moro rebels mowed them down, the ill-fated members of the elite Special Action Force (SAF) phoned and texted relatives and friends, pleading for help, asking them to tell their superiors that they had been surrounded and that they needed reinforcements.

Some appealed for cell phone loads. Another trooper, apparently fearing his hour had come, joined his mother on the other end of the phone and prayed the rosary with her.

Sen. Ralph Recto recounted to the Inquirer the last moments of the SAF commandos before they were killed, and proposed that the Senate invite their bereaved relatives to a proposed Senate probe.

Recto said the SAF commandos’ widows, mothers and other loved ones could provide added insights on what really transpired during the SAF operation to arrest a Malaysian terrorist hiding in Maguindanao province.

Sen. Grace Poe, who will hold an inquiry on the debacle next week, said this could be done.

Recto said that in the hours before they perished, several of the police commandos, through their cell phones, asked their relatives to transmit their pleas for help to their superiors.

“There were many who were pleading with their friends, relatives to convey to their higher-ups their need to be reinforced and extracted, which unfortunately did not happen,” Recto said in a statement.

Many of the relatives told Recto they were in constant touch with the commandos until the latter’s cell phones ran out of battery or they had used up their phone loads.

One SAF member who seemed to have sensed that his situation had become hopeless, was joined in praying the rosary by his mother, Recto added.

Recto said he learned all these during his visit to the wake of the slain operatives in Camp Bagong Diwa, Taguig City, on Thursday.

He also noted the narration of some relatives that they had received text messages from the commandos at 2 or 3 in the afternoon of that Sunday, contradicting reports that the firefight had ended at noon.

Recto said the text messages of the SAF forces and their conversations with their relatives were “the nearest that we have to a ‘black box,’” referring to the device that records what transpires in an airplane.

“You want to piece together the picture on the ground at that time? Then we can get it from the persons they last talked to. It may not be the whole picture, some may just provide snapshots, but it will help investigators draw the scenario at that time,” Recto said.

He said the last words of the slain SAF men would be known through their text messages or in the stories they told their loved ones.

“We need honest words, unblemished by political bias. That can take place only between the closest of kin,” Recto said.