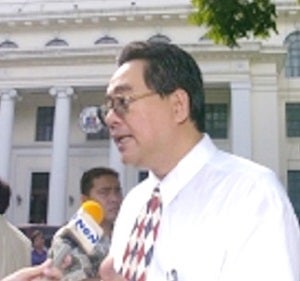 MANILA, Philippines–The House of Representatives will suspend all hearings on the draft Bangsamoro Basic Law (BBL) until authorities have provided lawmakers with a complete report on what happened in Mamasapano, Maguindanao, on Jan. 25, specifically the slaughter of 44 Special Action Force (SAF) commandos.

Cagayan de Oro Rep. Rufus Rodriguez, chair of the ad hoc committee tackling the proposed BBL, said his panel had given the Philippine National Police, Armed Forces of the Philippines and Office of the Presidential Adviser on the Peace Process until 5 p.m. Monday to submit their findings on the botched predawn raid by the SAF commandos on the hideouts of two terrorist bombers.

He said the BBL hearing scheduled Monday would be the last if the four agencies did not submit their reports. He said his committee conducted three hearings last week but these focused solely on minor issues and not national security and defense matters, among the thorniest provisions in the draft BBL.

Still in support of BBL

Speaker Feliciano Belmonte Jr. said the Liberal Party remained committed to support the BBL. Nationalist People’s Coalition spokesman Rex Gatchalian said his party had not changed its position in support of the BBL.

Cavite Rep. Elpidio Barzaga Jr. said the National Unity Party had no stand yet on the BBL. “I personally support it but there must be justice for the slain SAF members,” he said.

Magdalo Rep. Ashley Acedillo said he would reiterate his call for the House to suspend its BBL hearings immediately after the Senate suspended its own BBL hearings.

He said he disagreed with the government’s chief negotiator Miriam Coronel-Ferrer’s declaration that the MILF’s signing of a decommissioning protocol in Malaysia during the national day of mourning for the SAF 44 on Friday should erase all doubts on the Moro rebels’ sincerity.

He said his group of former police and military officials turned lawmakers would oppose any plan by the administration to railroad the BBL. “We’d rather not have peace because this is not the kind of peace we want, no surrender and no justice,” he said.