Slain SAF men are heroes regardless where they are buried—Palace 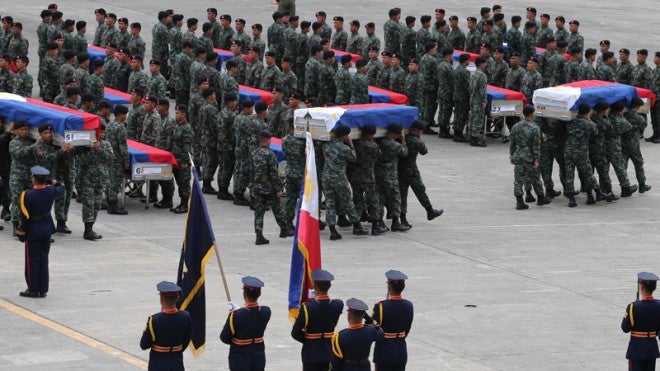 The Philippine National Police Special Action Forces carry the flag-draped coffins of their comrades upon arrival from the southern Philippines Thursday, Jan. 29, 2015 at Villamor Air Base in Pasay, Philippines. The flag-draped coffins bearing the bodies of 42 of the 44 policemen killed last Sunday were flown Thursday to Manila, where top government, police and military officials stood in mourning. (AP Photo/Bullit Marquez)

MANILA, Philippines— The 44 fallen heroes of the Special Actions Force of the Philippine National Police (PNP-SAF) in the latest Maguindanao bloodbath remain heroes whether buried at the Libingan ng mga Bayani or not.

(Regardless where they are buried, they will remain as true Filipino heroes.)

Coloma said that the kin of the 44 slain SAF commandos decided to bring home the remains of their loved ones in their provinces.

He added that the policemen’s relatives did not bring the issue to the President during their meeting at Camp Bagong Diwa.

The Palace official said it would be an inconvenience for the families of the victims who live outside Metro Manila to visit their fallen loved ones at the Libingan ng Mga Bayani in Taguig.

On Friday during the National Day of Mourning, Aquino commiserated with each of the victims’ families for 13 hours during and after the necrological services held at Camp Bagong Diwa in Taguig City.

During their meeting, Coloma said Aquino listened to the demands of the kin of the fallen policemen while the President vowed to give justice to their loved ones.

President keeps vigil with kin of Fallen 44 for hours