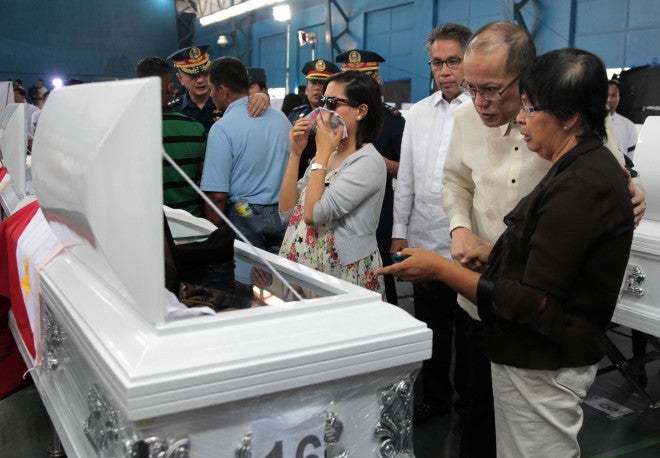 MANILA, Philippines — He may have been absent at the arrival honors but President Benigno Aquino III on Friday seemed to have tried to make up for it by extending his meeting with families of the 44 elite cops killed in an encounter in Maguindanao.

He condoled with each of them–for a total of 13 hours–during and after the necrological services held at Camp Bagong Diwa in Taguig City.

“Meeting with last of 44 families ended at 12:30 a.m. All told the President devoted 13 hours to meeting and condoling with each of the families,” Communications Secretary Herminio “Sonny” Coloma Jr. told INQUIRER.net.

Aquino was scheduled to meet with the families before the second half of the memorial services on Friday morning but the five minutes allotted for each family was not enough.

Arriving at Camp Bagong Diwa at around 10 a.m., the President first approached each of the coffins to meet with the families, awarde medals of valor and devote a prayer for each member of the Philippine National Police-Special Action Force (PNP-SAF) killed in a supposed “misencounter” with the Bangsamoro Islamic Freedom Fighters and the Moro Islamic Liberation Front.

He then proceeded to a holding room to meet with each of the families of the 44 troopers.

However, the President had to cut short the meeting to allow the program to proceed. After the program ended, around noontime, he returned to the holding room to meet the rest of the families.

At around midnight, Malacañang officials said the series of meetings was still ongoing.

Aquino has received flak for attending the inauguration of a car plant in Laguna, instead of attending the arrival honors for the slain policemen at Villamor Airbase on Thursday.

Many families and policemen also expressed dismay at his speech during the necrological services.

Both the families and the colleagues of the “SAF 44” asked Aquino to ensure that justice will be served.