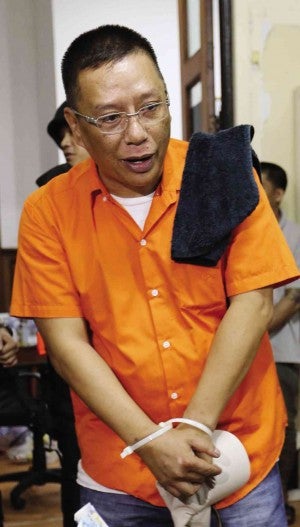 GUILTY STILL Boratong in a Dec. 15, 2014, photo, when he and 18 other high-profile, high-living inmates of New Bilibid Prison were transferred to the National Bureau of Investigation headquarters. INQUIRER FILE PHOTO

The Court of Appeals has upheld the conviction of Amin Imam Boratong and his wife Sheryl for operating a “shabu tiangge” near the Pasig City Hall, saying the testimonies of witnesses and physical evidence were enough to prove their guilt.

In a 38-page ruling, the appellate court’s Eighth Division upheld the June 30, 2009, ruling of Judge Abraham Borreta of the Pasig Regional Trial Court Branch 154 which sentenced the Boratongs to life imprisonment.

At the same time, it also junked the couple’s petition to stop the seizure of their assets as ordered by Borreta.

The Pasig court had imposed a P10-million fine on Boratong and P1 million against his wife for operating the tiangge which housed several drug dens that was raided by the police in February 2006. Both were sentenced to life imprisonment while Sheryl was slapped an additional fine of P1 million for possession of illegal drugs.

Boratong was among 19 high-profile drug convicts transferred by the Department of Justice to the National Bureau of Investigation last month. This was after a raid conducted on their “kubol” or huts inside the New Bilibid Prison turned up contraband items, including huge amounts of cash, drugs, guns and air-conditioning units.

Boratong has a pending petition in the Supreme Court questioning his transfer to the NBI.

In its ruling, the appellate court said that “there [was] no reason to deviate from the findings and conclusions of the trial court.”

“Regrettably for accused-appellants, this court failed to identify any error committed by [the Pasig court], both in the appreciation of the evidence presented before it and in the conclusion it arrived at,” said the ruling penned by Associate Justice Stephen Cruz.

According to the appellate court, it respected the Pasig court’s assessment of the witnesses’ credibility “since, as an appellate court, we do not deal with live testimonies of witnesses but only with the cold pages of written record.”

It cited testimonies and pieces of evidence that detailed how the couple operated the shabu tiangge on Mapayapa Compound, located close to the Pasig City Hall.

“Beyond cavil, the foregoing straightforward and candid testimonies of the prosecution witnesses are complete to show accused-appellants’ illegal activities being perpetrated at the Mapayapa Compound or so-called shabu tiangge,” said the ruling.

“In the case at bar, the evidence established beyond cavil that the integrity and the evidentiary value of the seized items were preserved. Verily, we hold and so rule that the prosecution has discharged its burden of proving the guilt of accused with moral certainty,” it added.

The court also dismissed the couple’s claims that Borreta had committed grave abuse of discretion in ordering the seizure of their assets.

“Suffice it to say, petitioner failed to establish that that challenged twin orders were issued with grave abuse of discretion that is so patent and gross as to amount to an evasion or refusal to perform a duty enjoined by law,” it said.