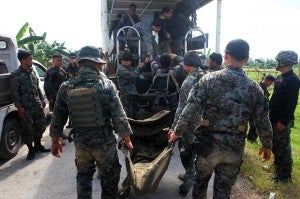 Philippine police commandos load body bags containing the remains of their comrades killed in a clash with Muslim forces, onto a truck in the town of Mamasapano, on the southern Philippine island of Mindanao on January 26, 2015. AFP FILE PHOTO

VIRAC, Catanduanes, Philippines – At 27, Max Jim “Mac-Mac” Ramirez Tria had achieved the same rank as his policeman-father, Senior Insp. Guillermo Tria Jr., who heads the Internal Affairs Service unit of the police in the province.

The young Tria was proud of being a member of the elite Special Action Force (SAF) of the Philippine National Police (PNP) and was doubly proud of getting top honors in sniper school, commando and scout ranger training, and in handling explosives and ordnance.

This bright career path was cut short by a fierce firefight that also claimed the lives of 43 other SAF members in Maguindanao on Jan. 25.

By Thursday morning (January 30, 2015), Max Jim would have reached home, his remains in a coffin; flown to Virac on board an 8 a.m. Cebu Pacific flight. He is the lone casualty from the Bicol region.

Guillermo recalled that he had asked Tria, the third of the five boys he raised with wife Efigenia, to request for relief from his assignment in Basilan but the young officer asked for one more year.

Holding back his emotions, Guillermo, now 53 and less than two years away from retirement, recalled that when he told his son that he planned for optional retirement, Max Jim asked him to finish his career.

The last time they talked at length was on the evening of January 19, the father told the Inquirer.

Guillermo said sent a text message to his son, “Anong balita diyan (What’s going on there)?” and got no answer.

After a miscall from his father, Mac-Mac called back and told him he was being pulled out for a mission to Maguindanao. As a matter of courtesy, Guillermo did not ask about the mission.

That time, the son jokingly asked his father if he wanted a grandson. Tria then said that they would talk after April after the giving birth of a woman whom he did not name.

On Thursday or Friday, Tria contacted his son again and asked if he was already “home base.” Mac-Mac said he was still enroute, as the truck they were riding had broken down, and that they were resting and eating. “Ingat lang kamo diyan (Take care of yourselves),” was his last words to the SAF officer, spoken in Bicolano.

On Sunday evening past 10 p.m., he was watching TV when he saw the flash report that 27 SAF men had been killed in Maguindanao.

“This is a problem…” he said to himself, and started texting and calling Mac-Mac’s cellphone. When the following day, the son’s number could no longer be reached, the agonizing reality began to sink in. “Daculang problema ini…(This is a big problem…)”

A certain PO2 Ayo, who had joined the young Tria during his vacation in Virac, later told him that his senior officer was the only one pulled out from their unit.

It was the first time the young Tria carefully arranged his things, Ayo related, compared to previous deployments when he usually left things scattered in the quarters. “I even lent him my bulletproof vest and my bullets,” the lawman told the grieving father. “I told him, bring more bullets as there can be an encounter.”

Ayo also recalled that the young Tria left Basilan with a facial expression that seemed to say he did not want to go.

When his son’s death in Maguindanao was confirmed, the elder Tria sought to know if the body of his son was mutilated and he sighed with relief when told it was not. His son’s fellow officer, a batch mate at the Philippine National Police Academy in 2009, was rumored to have been beheaded.

Guillermo has accepted the untimely death of his son. “Maybe it was just his time. We can’t do anything about that anymore.”

“President Aquino would be callous to the fate of the slain cops if the government proceeds with the Bangsamoro Basic Law,” Tria said in the vernacular. “Many more lives of policemen and soldiers would be lost.”

He regretted that the close relationship that he and his five sons had forged through the years would be marred by the loss of one sibling.

His eldest, Ace John, 30, is an overseas Filipino worker in Spain, while the second, Guillermo, 28, is a seaman currently in Manila awaiting redeployment abroad. The fourth, Julius, 25, an Information Management graduate, is at their sprawling residential compound in Cabihian, Virac, while the youngest, Guio, 20, is a Bachelor of Science in Business Administration student at the Catanduanes State University.

The last time the entire Tria brood gathered in the farming village of Cabihian was in 2012 when they all went home for the christening of Julius’ eldest child.

Julius says his brother’s ambition to succeed his father as a policeman began in high school, a dream that was encouraged by Guillermo who felt one of his kids would follow him. Tria entered the PNPA right after graduation from the CSU Laboratory Schools and came out one of the youngest graduates.

Upon graduation in 2009, the young officer was assigned at the PNP-SAF headquarters in Bicutan, Taguig, for about a year before he was fielded to Basilan.

From then on, Tria sought to improve himself, finishing sniper school as number one and earning top honors in scout ranger and commando training as well as for explosives and ordnance.

Tria’s brother Julius told the Inquirer that the officer was physically and mentally prepared to die fighting, with dad Guillermo recalling that his son liked what he described as “wagwagan,” the SAF term for the deadly exchange of gunfire.

The elder Tria remembered his last conversation with his son, the latter kidding about having a son with a woman whom he did not name. Tria said they would talk about it seriously during his vacation this summer.

This May 18, Tria would have been the best man in the wedding of his eldest brother to a policewoman. But with him gone, the celebration would be tempered with the realization that the family would never be complete again.