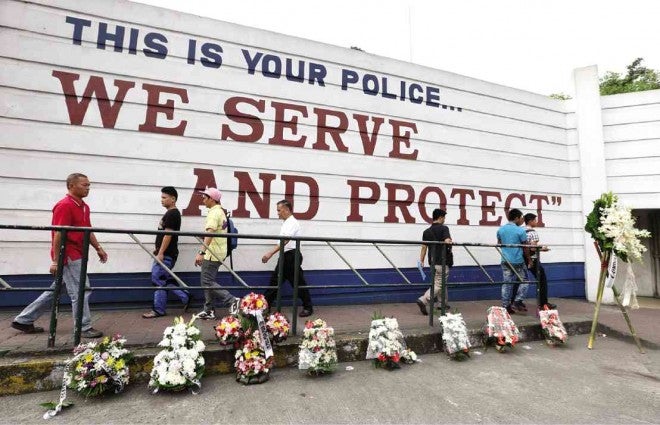 INSTANT EDSA SHRINE Sympathizers leave flowers Wednesday along the sidewalk leading to the gate of Camp Crame on Edsa in Quezon City to honor the 44 members of the Philippine National Police-Special Action Force who were killed by Moro rebels on Jan. 25 in Mamasapano, Maguindanao province. Lyn Rillon

Amid calls for sobriety, the brothers in arms of the 44 members of the police Special Action Force (SAF) who were slain Sunday in pursuit of wanted terrorists in Mamasapano, Maguindanao province, have come out to express indignation over the government’s single biggest loss of security personnel in recent memory.

Two police organizations called on the government to be more forthright about the “massacre” and denounced their comrades’ attackers as “organized crime groups” protecting international terrorists.

The head of the Quezon City-based alumni office of the Philippine National Police Academy (PNPA), which lost six members in the Jan. 25 clash, raised the possibility of the group suing not only the SAF members’ killers but also the higher-ups behind the ill-fated operation.

The PNPAAA head said the association would soon take legal action against the perpetrators of the attack and possibly also against “the authorities who ordered the operation.”

Another group calling itself the Christian Officers Reform the Police Service (Corps) Movement, led by founding chair Senior Supt. Cesar Binag and president Senior Supt. Gilbert Cruz, asked the government “not to dishonor the heroic deaths [of the SAF members] by calling it a ‘misencounter’ or just ‘an incident.’”

“It is totally unacceptable to the families and to the long line of policemen and women who risk life and limb daily to serve and protect the Filipino people,” Corps said in a statement. “Let us call it as it is—the massacre of our SAF troopers who were out to serve a warrant of arrest against a Jemaah Islamiyah (JI) terrorist.”

The group noted that, so far, the government’s phrasing of what happened sounds as though it was making “excuses.”

“Why make an excuse for doing your job? It is and within the prerogative of the State to pursue law enforcement operations especially targeted against suspected terrorists in the wake of recent bombings in various towns and cities in Mindanao,” it said.