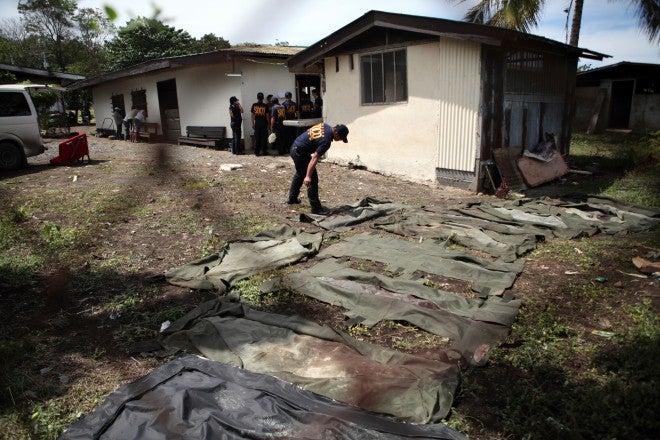 The policemen were part of the 392 members of the Special Action Force (SAF) tasked to arrest Malaysian terrorist Zulkifli bin Hir (also known as Marwan) and Filipino bombmaking expert Basit Usman who are both connected with Jemaah Islamiyah.

“Bilang paggalang sa mga ng mga nasawi, magdedeklara tayo ng isang National Day of Mourning bilang sagisag ng pagdadalamhati at pakikiramay ng ating buong bansa (As a sign of respect to those who died, we will declare a National Day of Mourning as a symbol of our nation’s grief and sympathy),” Aquino said in a speech before media and his Cabinet members in Malacanang.

He said the National Day of Mourning will be on Friday, January 30.

After the President’s 16-minute speech, Malacañang released Proclamation no. 953, which asks all public institutions and installations to lower the Philippine flag to half mast on Friday.

“These deaths are a great loss to our people and during this time of grief, a most solemn commemoration and respect is called for,” it said.

Communications Secretary Herminio Coloma Jr. said there was no announcement if work or classes will be suspended.