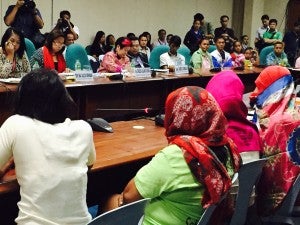 MANILA, Philippines — Social Welfare Secretary Corazon “Dinky” Soliman finally admitted during a Senate hearing on Tuesday that some 100 families were brought to an air-conditioned resort in Nasugbu, Batangas as part of the preparation for Pope Francis’ visit to the country.

(We talked to the (governments of) Manila, Parañaque and Pasay because I wanted to explain, madam chair, that it was true that, to prepare for Pope Francis’ arrival, these local governments wanted to make sure that Roxas Boulevard was in a secure and safe state and so were the people as they could be discriminated against and used by syndicates there with the influx of people in the area.)

(So when we reached out to the families on Roxas Boulevard, since we were already planning to register them to the modified Conditional Cash Transfer (program), we thought it could be the right time to hold the orientation from Jan. 15 to 19.)

The period was the same time the Pope visited the country.

Soliman explained that the activity was part of the “family camps for homeless family” under the government’s modified CCT meant to protect them from hazards and exploitation. It was also a chance, she said, to give homeless families social services while at the camp and allow them to also experience new things.

She said these programs for street children and homeless people have started as early as August of 2011.

The investigation of the committee was initiated by its chair, Senator Nancy Binay.

‘Homeless not hidden from Pope; they were in training’