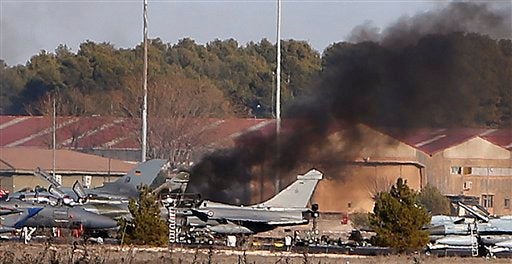 Smoke rises from a military base after a plane crash in Albacete, Spain, Monday, Jan. 26, 2015. A Greek F-16 fighter jet crashed into other planes on the ground during NATO training in southeastern Spain Monday, killing at least 10 people, Spain’s Defense Ministry said. AP PHOTO/JOSEMA Moreno

“Seven of the injured are in a ‘very serious’ condition,” a defense ministry spokesman told AFP.

Earlier on Monday the defence ministry said a Greek F-16 plane had crashed on takeoff at the base at Los Lanos near the southeastern city of Albacete, striking other planes parked on the tarmac, but that it was not immediately clear if there had been fatalities.

“The plane, part of NATO’s Tactical Leadership Programme, was participating in an exercise when it lost strength during takeoff, crashing into the parking area for planes, striking some planes,” the statement said.

“Emergency crews are working to put out the fire to determine if there are fatalities and evaluate the damages that may have been caused to other NATO planes,” it added.

Television footage showed flames billowing from the crash site, which was shrouded in black smoke.