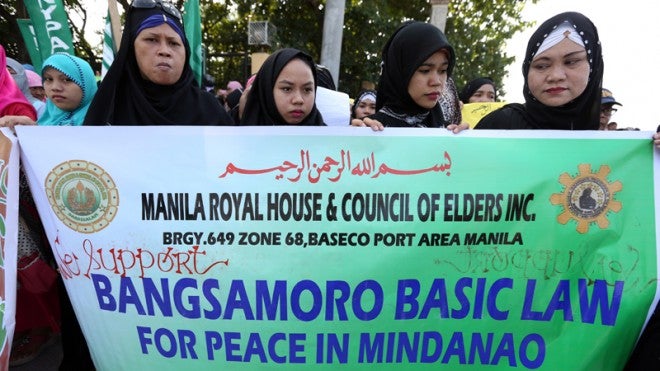 LOBBYING FOR PEACE Muslims gather outside the Senate on Monday to push for the swift passage of the Bangsamoro Basic Law as the Senate committee on constitutional amendments, chaired by Sen. Miriam Defensor-Santiago, holds session. NIÑO JESUS ORBETA

MANILA, Philippines–The future Bangsamoro region, which is vested with so much power on paper, may yet secede from the Philippines, former Supreme Court Justice Vicente Mendoza warned on Monday.

They argued that the proposed Bangsamoro region enjoyed more powers that undermined Philippine sovereignty, was a substate unto itself, and hewed to a parliamentary form under a presidential system.

Hence, the structural changes that the draft Bangsamoro Basic Law (BBL) sought to introduce may require constitutional amendments, they argued.

“A parliamentary form of local government in an otherwise presidential system is an oddity, an anomaly,” Mendoza told the joint hearings of the Senate committees on constitutional amendments, local government and peace.

The word “substate” was used to describe the Bangsamoro, and meant being part of a state, she said.

“Independence was never on the negotiating agenda of the government. The whole idea of negotiation was precisely to keep the country intact,” she said.

Hearing the arguments, Sen. Miriam Defensor-Santiago, chair of the committee on constitutional amendments, agreed that the proposed BBL could not stand legal scrutiny, and expected it to be questioned in the Supreme Court.

“It’s more than a novel proposition, it’s like Cloud-computing. You know when you sit down before your computer, if you need to know your resources and material, sometimes you reach out to the Cloud if you run out of ideas. I think that’s what happened to the BBL,” she later told reporters.

Mendoza observed that the future Bangsamoro region has a clearly defined territory and people, and a parliamentary form of government, but otherwise possesses “more powers” in the region than the national government.

For instance, the Bangsamoro could contract loans, trade with the Association of Southeast Asian Nations, and receive donations from foreign sources, among a host of others, he said. “These are attributes of a state,” he said.

More interestingly, Senate Bill No. 2408, the Senate version of the proposed BBL, carried the declaration that the Bangsamoro people have the “right to self-determination,” Mendoza said.

“Whereas in the UN (United Nations) charter and other documents, self-determination doesn’t mean external self-determination. It’s been recognized to be limited by a respect for existing government and has been limited to autonomy with respect to local matters, but never external powers that could lead to secession,” he said.

“There is a big threat of secession staring us in the face. There have been comments during the hearing this morning that what appears to be structured or organized by the BBL is not a mere region of local autonomy as provided by our Constitution,” she said.

“The problem of this BBL is that it appears to be going beyond what is listed in the Constitution,” Santiago added.

“We are convinced that secession will not happen if we’re able to come together as a country and welcome the establishment of the Bangsamoro through legislation. When that happens, there’s no reason for any group to secede,” she told reporters.

The Senate is racing against time to approve on final reading the draft BBL before adjourning for Lent in March. The government is eyeing its ratification by plebiscite in October so that the Bangsamoro officials could be elected in May 2016.

“If you cut out and designate as exclusive powers and authority, and give that to the Bangsamoro government, you necessarily need to reduce the sum total of the authority vested in the government of the Republic of the Philippines,” he added.

To put the distribution of powers into effect, constitutional amendment is needed, Feliciano said.

Feliciano also proposed that the provision that the Bangsamoro shall remain part of the Philippines should be given a “forceful meaning.”

“It’s not a window-dressing measure. In other words, retention within the Republic of the Philippines must be real and not merely verbal in character. That is the problem that we have in understanding both the draft BBL and the comprehensive agreement,” he said.

After Feliciano concluded his statement, Santiago invited the audience to give him a standing ovation.

Teresita Quintos-Deles, presidential adviser on the peace process, said that the draft law did not require constitutional amendment.

“We will also not find a single guarantee for Charter change to accommodate the CAB. The most accurate that can be said is that this agreement recognizes the right of any citizen of the republic, including those who are appointed in the Bangsamoro Transition Commission, to propose amendments to the Supreme Law,” she said.

Pimentel, for his part, said that to allow a part of a country to be governed under a parliamentary form of government when the Constitution had proclaimed that the whole country had adopted the presidential form “would be, to say the least, incongruous.”

“That’s dangerous tinkering with the allocation of powers between national and local government,” he said.

Congress can delegate powers, mostly involving legislation, to the Bangsamoro government, but the draft law “grants them more than these,” Mendoza said.

Mendoza pointed out that the Bangsamoro constituted a substate, but this was not one of the forms authorized by the Constitution such as province, city, municipality, barangay and autonomous region.

“I submit that Congress can’t enact a law providing for any other form of local government,” he said.

While independence was not mentioned in the draft BBL, it was “studiously avoided” to provide an equivalent of independence, Mendoza said.

“In instances where independence could not be justified, the principles of asymmetrical relationship and subsidiarity are invoked,” he said.

Ferrer said the word substate had been “unjustly demonized.”

“As in any demonized term, waive it like a red flag and people will rail against it. It is almost like the term ‘Moro’—say it and in the minds of many, you generate fear, distrust, suspicion, hate,” she said.

“Such is the unfortunate state of mind that we have inherited from Spanish and American colonial rule. Such hatred has led us to continue to think like the colonials: A good Moro is a dead Moro. Fast forward 100-500 years later: A good susbtate is a dead substate. Unconstitutional! Bang, you’re dead,” she added.

Bishops back Bangsamoro basic law, but…