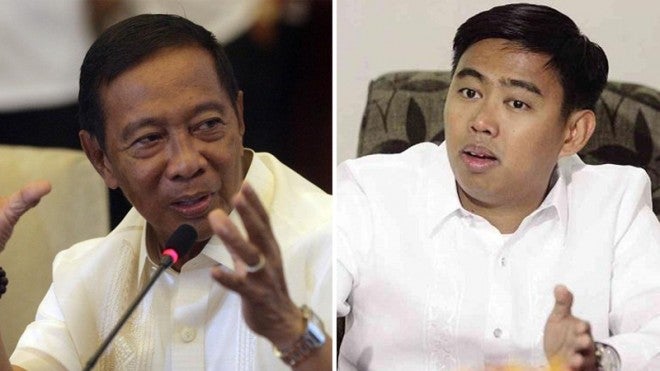 Vice President Jejomar Binay on Saturday said he and his son, Makati City Mayor Jejomar Erwin Binay Jr., were ready to “face the consequences” of their decision not to appear in the Senate to answer allegations of corruption against them.

“I will never go there if that’s the way they conduct the investigation. They behaved like that up to Jan. 22,” Binay said in a radio interview in Isabela province, referring to the prosecution style of questioning by the senators on a Senate blue ribbon subcommittee investigating charges that he pocketed millions of pesos in kickbacks from infrastructure projects in Makati when he was the mayor of the city.

Binay said the senators would just demean him once he appeared at the inquiry.

“What else will they ask me? Everything they need has already been answered,” Binay said, referring to his public denials of the charges leveled against him at the inquiry by former Makati Vice Mayor Ernesto Mercado.

In a series of appearances at the subcommittee last year, Mercado disclosed overpricing in the construction of the P2.28-billion Makati City Hall Building II, charged that Binay took kickbacks from all infrastructure projects in Makati City, and secretly owned real estate properties, including a 350-hectare agricultural farm in Rosario town, Batangas province.

Mercado also admitted serving as a dummy for Binay and delivering kickbacks to him in large bags received for him by his children, including Sen. Nancy Binay and Makati’s Mayor Binay.

Most recently, Mercado, testifying at the subcommittee hearing on Jan. 22, charged that Binay took P200 million in kickback from a deal between the Boy Scouts of the Philippines (BSP), of which Binay is president, and Alphaland Corp. for the development of a 1-hectare BSP property in Makati.

Mercado alleged that the P200-million kickback went to Binay’s vice-presidential campaign in 2010.

Binay’s camp, Alphaland and the BSP denied Mercado’s allegation. The BSP said it was Mercado, who served as vice president of the organization, who negotiated the development deal with Alphaland, not Binay.

Mercado admitted that he was the negotiator, but said he did it on behalf of Binay and that he signed the contract on instructions from Binay.

The blue ribbon subcommittee headed by Sen. Aquilino Pimentel III has summoned Binay to the inquiry, promising him respectful questioning.

The Vice President, however, has refused to face the senators, saying they have already prejudged him, and citing their treating resource persons like accused criminals undergoing court examination.

For the same reason, Mayor Binay, who appeared at the inquiry just once last year, has refused to come back. He has also questioned the jurisdiction of the subcommittee over the Makati City Hall Building II case after its elevation to the Office of the Ombudsman last year.

Fed up with the mayor’s defiance, the subcommittee recommended to the blue ribbon committee that he be cited for contempt and ordered arrested.

On Friday, Sen. Teofisto Guingona III, head of the blue ribbon committee, issued a final call to Mayor Binay and six others from Makati City to heed the subcommittee’s summons or they would be ordered arrested and detained.

“We are ready to face the consequences,” the Vice President said on Saturday. “We will continue fighting this process. Let us remember, those who are being invited are resource speakers. They are not witnesses.”

Referring to the order for his son to show up at the inquiry, Binay said: “Everything has been answered. This is too much.”

On Friday, after hearing Guingona’s ultimatum, Mayor Binay said all he wanted was “due process.”

“If you may recall, I appeared before the subcommittee and answered the questions from the senators for six hours. However, I was either cut off or denied the chance to reply. The senators simply wanted to humiliate me,” Mayor Binay said.

“All I am requesting is for the senators [on] the subcommittee to accord to all persons summoned to their hearings their rights based on the Constitution and jurisprudence. While the senators threaten me with contempt, they have not taken any action to discipline their witnesses who have lied under oath several times. This is most unfair,” he said. “I shall act accordingly once a formal order is issued.”

On Saturday, Makati City spokesperson Joey Salgado clarified in a telephone interview that the mayor’s statement on Friday does not mean he will attend the Senate hearing but that he will wait for the decision of the blue ribbon committee on Monday then “act on it accordingly.”

“Every time elections come, they throw around the same accusations. It’s only they who raise those charges, but they offer no evidence,” Binay said.

The Vice President said he expected the attacks in the Senate to continue, but insisted that the public already knew Mercado and the other witnesses presented by the senators were lying.

Binay denied Mercado’s claim that he was forced to sign the Alphaland agreement because Binay was unavailable at the time.

“If I was away, the longest I would be gone was one week. It was a long negotiation, and he was the only one who faced and negotiated with Alphaland,” Binay said.

The Vice President’s spokesperson for political affairs, Rico Paulo Quicho, said yesterday that even Senator Pimentel had said Mercado had no evidence to back his claim that Binay accepted kickback from the BSP deal.

“He had no documentary evidence, but he tried to explain how the kickback was given to Binay,” Pimentel said in an interview on dzMM radio on Thursday afternoon.

Quicho said it was unfair of Mercado to say that the Vice President was involved in the venture when the BSP approved a resolution authorizing Mercado to make the transaction for the organization.

“What was unfortunate was how the members of the [blue ribbon] subcommittee were allowing Mercado to pin the blame on the Vice President and seemed to be coordinating with Binay’s detractors,” Quicho said.

“What we see is a pattern of build and destroy. Vice President Binay’s accomplishments for a long period of time in Makati and in the housing sector are being destroyed,” he said.

Quicho noted that in his radio interview, Pimentel said all Mercado had was his statement and that Alphaland had issued a statement saying it dealt with Mercado the whole time and that it was actually Mercado who was hinting at kickbacks.

Pimentel said the inquiry would have to hear directly from Alphaland during the next hearing, Quicho said.

Alphaland president Mario Oreta wrote Mercado to refute his claims of irregularities in the company’s deal with the BSP and say that it was he who wanted kickbacks.

“I am sure you will remember that you made less than subtle hints that some ‘benefits’ were due to you for agreeing to conclude this project, and I am sure that you will also remember what I explained to you that Alphaland was a joint-venture company with the Ashmore Group, and that every transaction was closely scrutinized by Ashmore,” Oreta said in that letter to Mercado.

“Thus it was impossible for Alphaland to agree to give you any such ‘benefits,’” Oreta added.

Quicho said Pimentel, in his radio interview, refused to give a categorical answer and parried further questions when asked if he could say whether Binay was really involved in the Alphaland deal.

In his radio interview in Isabela, Binay denied involvement in the deal.

“In this BSP case, [Mercado] was the one [who negotiated] with Alphaland. He was the one who had the power of attorney. I was not involved there,” Binay said.

“When he said I got P200 million, maybe he was mistaken. Perhaps he spent the P200 million in his gambling binge,” Binay said, noting that Mercado was a gambler who bet big time in cockfights.

The blue ribbon subcommittee inquiry has been running since Aug. 20 last year. Senate Majority Leader Allan Peter Cayetano, who serves on the subcommittee, said on Thursday that four more hearings may be called, which could stretch the inquiry up to March.

Earlier, Sen. Miriam Defensor-Santiago, a critic of Binay, said the inquiry should end soon because the public “has become impatient.”

Speaking in Lingayen town in Pangasinan province, Cayetano said an early ending for the inquiry depended on Binay’s camp.

He said supporters of the Vice President were “hiding the witnesses,” prolonging the inquiry.

“And then they wait until the inquiry is forced to terminate. Case closed, but not case solved, like the Rosario property,” Cayetano said, referring to the Batangas agricultural farm that Binay had disowned.

Those irregularities, he said, are “bigger” than the BSP mess.

Returning to Pangasinan from Baguio City on Saturday, Cayetano spoke to reporters again and urged the Vice President and the Makati mayor to face the Senate inquiry and answer the charges against them. With reports from Maricar B. Brizuela in Manila and from Yolanda Sotelo, Gabriel Cardinoza, Villamor Visaya Jr. and Vincent Cabreza, Inquirer Northern Luzon

Final call out for Binay son