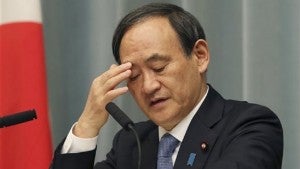 Japan’s Government spokesman Chief Cabinet Secretary Yoshihide Suga ponders during a press conference at the prime minister’s official residence in Tokyo Friday, Jan. 23, 2015 as militants affiliated with the Islamic State group have posted an online warning that the “countdown has begun” for the group to kill the pair of Japanese hostages. Suga reiterated Friday that Japan was trying all possible channels to reach those holding the hostages, and that its policy of providing humanitarian aid for those displaced by conflict in the Middle East was unchanged. AP Photo/Koji Sasahara

TOKYO — Japan promised Saturday not to give up “until the very end” on efforts to rescue two Japanese hostages threatened with beheading by Islamic militants demanding a $200 million ransom, after a deadline passed with no word from the captors.

Militants affiliated with the Islamic State group posted an online warning Friday afternoon that the “countdown has begun” for the extremists to kill 47-year-old Kenji Goto and 42-year-old Haruna Yukawa. The extremists gave Prime Minister Shinzo Abe 72 hours to pay the ransom, and the deadline expired Friday.

The posting, which appeared on a forum popular among Islamic State militants and sympathizers, did not show any images of the hostages, who are believed to be held somewhere in Syria.

Yasuhide Nakayama, a deputy foreign minister sent to Amman, Jordan, said he was working around the clock to coordinate efforts to save the hostages.

“We will not rule out any possibility, and we are verifying all information thoroughly,” he said. “We will not give up. I believe it is my duty to ensure we will definitely get them back home, and I will do my utmost to do so.”

Yet, the fate of the two men remained unclear Saturday.

Top government spokesman Yoshihide Suga was asked about Friday’s message and said Japan was analyzing it.

“The situation remains severe, but we are doing everything we can to win the release of the two Japanese hostages,” Suga said. He said Japan is using every channel it can find, including local tribal chiefs, to try to reach the captors.

He said there has been no direct contact with the captors.

Abe met Friday with his National Security Council on the crisis. Government spokesman Kenko Sone said Japan had no plans to dispatch troops on a rescue mission, saying its pacifist constitution bans any pre-emptive strike, even under a new interpretation adopted last year that’s intended to expand the country’s military role.

Japan has scrambled for a way to secure the release of Goto, a journalist, and Yukawa, an adventurer fascinated by war. Japanese diplomats had left Syria as the civil war there escalated, adding to the difficulty of contacting the militants holding the hostages.

Worshippers at Tokyo’s largest mosque on Friday offered prayers for the two hostages.

“All Muslims in Japan, we want the Japanese hostages to be saved as soon as possible,” said Sandar Basara, a worker from Turkey.

Goto’s mother made an appeal for his rescue.

“Time is running out. Please, Japanese government, save my son’s life,” said Junko Ishido. “My son is not an enemy of the Islamic State.”

Ishido said she was astonished and angered to learn from her daughter-in-law that Goto had left for Syria less than two weeks after his child was born in October to try to rescue Yukawa.

Suga said earlier the government had confirmed the identities of the two hostages despite discrepancies in shadows and other details in the ransom video that suggested it might have been altered.

Japanese officials have not directly said whether they are considering paying any ransom. Japan has joined other major industrial nations in the Group of Seven in opposing ransom payments. U.S. and British officials said they advised against paying.