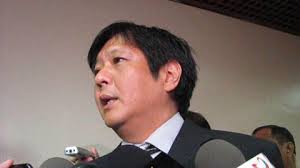 Senator Bongbong Marcos on Friday said the committee on local government has approved the bill for the postponement of the SK elections. INQUIRER file photo

The SK polls were originally scheduled for February 21, 2015.

After holding a hearing on Friday, committee chair Senator Ferdinand “Bongbong” Marcos Jr. announced that the bill was already approved by the panel and will now be ready for plenary actions next week.

In a press conference, Marcos clarified that the postponement  of the SK polls will only  become definite once the  Senate  approves  the  bill  on third and  final  reading.

“Again, it’s only approved in the committee level. We still have to go through the process of sponsoring it and (have) it passed on third reading. Hanggang doon hindi pa natin masasabi na talagang tapos na ang proseso and the postponement is definite, so we will have to wait until we go through the  entire legislative process,”  he said.

The House of Representatives has already passed its own version of the bill.

During the hearing, Commission on Elections (Comelec) Chairman Sixto Brillantes Jr. said postponing the SK  polls this year  would  solve  their problems  in preparing for the  2016 presidential elections.

“We believe that our work is being hampered by an election between our preparation for the May 2016 elections…and an election in between,”  Brillantes told the committee.

“There are effects of an election in between because we will have to suspend registration. Second, we will be spending so much for the SK elections,”  he said.

Brillantes pointed out that the Comelec was given a budget of only  P900 million whereas the projected   cost of the SK polls was P1.1 billion.

“And we think that if we will  hold  these elections now under the  old system without the  reform bill,  it would be, I beg the indulgence of the chairman, it would be a useless expense  for us to spend P1.1 billion still under the old SK law without any reform bill,” Brillantes said.

Congress urged to immediately decide on fate of SK elections

Read Next
Congress urged to immediately decide on fate of SK elections
EDITORS' PICK
Disease expert: Omicron variant may behave like Delta
Palace: Malls, establishments may require customers to use of face shields
This new condo in the South will make you want to turn a new leaf
Smart offers wireless fiber-like speeds to Filipino homes with country’s first 5G Prepaid Home WiFi
Syringes for Pfizer vaccine arriving on December 2 — NVOC chairperson
Legarda: Ending Violence Against Women, a cause for all
MOST READ
Bongbong Marcos to face another disqualification case
Christine Bersola, Julius Babao cleared of cancer after colonoscopy, endoscopy
Former PM Abe says Japan, US could not stand by if China attacked Taiwan
Tropical storm intensifies as it approaches PAR
Don't miss out on the latest news and information.