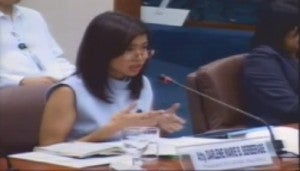 MANILA, Philippines—Vice President Jejomar Binay never sought any deal for favored contractors at the Home Development Mutual Fund (Pag-Ibig) and it was unfair to imply that its employees were corruptible, according to the agency’s president Darlene Berberabe.

Berberabe came to Binay’s defense on Thursday amid allegations that he used his clout as chair of the Pag-Ibig board to his advantage.

She told the Senate blue ribbon subcommittee looking into alleged anomalies in Makati City that the Vice President’s only role was to heed her request for a recommendation for a security agency that could provide her with bodyguards.

A former president of Omni, Jose Orillaza, alleged that he had been Binay’s dummy in the company, which also bagged multimillion-peso contracts from the Makati City government. Binay has denied this.

“If the issue is whether the Honorable Vice President Jejomar C. Binay, who is the chair of the Pag-Ibig Fund board of trustees, used his power to get Omni into Pag-Ibig, I categorically say that no. This did not happen,” Berberabe told senators.

Sen. Alan Peter Cayetano said the contract with Omni for Berberabe’s bodyguards was marred by conflict of interest because one of Omni’s officers was the wife of Pag-Ibig trustee Tomas Lopez, and the deal did not undergo public bidding as required by the procurement law.

Sen. Antonio Trillanes IV, for his part, raised questions about Pag-Ibig’s lease of two buildings, one of which was owned by former President and now Manila Mayor Joseph Estrada. Estrada is a political ally of Binay.

Berberabe said on Thursday that Pag-Ibig’s transactions and contracts had gone through the proper processes.

She also acknowledged that it was Binay who recommended her for the Pag-Ibig post and that she was the sister-in-law of Binay’s chief of staff.

But she said that Binay did not use his power to get Omni contracts from Pag-Ibig and that it was unfair to make it seem that the agency’s officers and employees who sign documents could be forced to sign something illegal or immoral.

“In the strongest terms, I say this is most unfair because Pag-Ibig has been known, especially the last four years, for its excellent performance and integrity. We have been very vocal in our collective stand against corruption, and each employee signed an Integrity Pledge,” she said.

She herself is committed to do the right thing, she added.

“Nobody can force me to do something wrong while I am in public service, because I can always return to the private sector. And I can also say that in the four years that I have been serving in Pag-Ibig, there has been no order from Vice President Binay that challenged my resolve to do what is right,” she told the senators.

In asserting that Omni was not given privileges, she pointed out that it had been disqualified from bidding for a P193-million contract for security guards because it was late in submitting documents by one minute.

Omni’s only dealing with Pag-Ibig was for her three bodyguards in a series of four-month contracts, each worth P420,000.