Senate seeks update on probe of killing of ex-Makati engineer 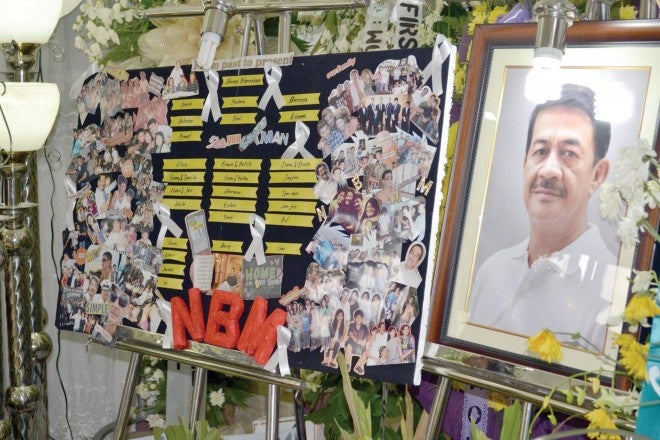 Friends and family pay their last respects to Nelson Morales, former city engineer of Makati and Albay chair of the United Nationalist Alliance, in his residence in Malinao town, at his wake. Morales was buried Sept. 15, 2012. MAR S. ARGUELLES/INQUIRER SOUTHERN LUZON FILE PHOTO

MANILA, Philippines–Sen. Aquilino Pimentel III wants to know the progress of the investigation into the killing of a former Makati City engineer, Nelson Morales, whose name has been mentioned several times in the course of a Senate blue ribbon subcommittee’s inquiry into alleged corruption in Makati during the time of Vice President Jejomar Binay as mayor of the city.

Pimentel invited the Philippine National Police to send a representative to the subcommittee hearing Thursday to provide information about the investigation into the killing of Morales.

Pimentel on Wednesday said his question about Morales’ death would be just a side issue in the hearing.

He said Morales’ name had been mentioned 10 to 20 times so far in the inquiry and this could not be ignored.

“This would be supplemental information to complete the picture,” Pimentel said in a telephone interview.

Morales, provincial chair of United Nationalist Alliance, was shot dead on Sept. 7, 2012, in Albay province after a wedding ceremony.

Former Makati Vice Mayor Ernesto Mercado testified before the subcommittee that Morales had given bags of cash to him for delivery to Binay when the Vice President was still mayor of Makati or to Binay’s aides. He said the money represented Binay’s kickbacks from infrastructure projects in the city.

Mario Hechanova, who used to head the Makati General Services Department, also testified that Binay coursed through Morales his instructions to rig biddings for infrastructure projects.

The camp of Binay has denied the allegations. A spokesperson for Binay said Morales and Hechanova were Mercado’s protégés, and that it was known that the former vice mayor, city engineer and Hechanova were the ones rigging the bidding.

Pimentel said he would ask the PNP representative about the progress of the investigation into the killing of Morales.

He said there was a recent report that three members of one family were gunned down in Albay, and police suspected the attacks were related to Morales’ killing.

The victims were reportedly suspected of being police informants in the Morales case.

As for Berberabe, Pimentel said he would ask for details about Pag-Ibig Fund’s supposed dealings with Omni Security, which has been linked to alleged Binay aide Gerardo Limlingan.

Berberabe has said the agency has not entered into any questionable contract.

In the Know: Who’s Nelson Morales?

Read Next
Binay got P200M in Boy Scouts land deal–Mercado
EDITORS' PICK
Bongbong Marcos says PH ‘open for business’ with new Clark Airport terminal
Individuals affected by ‘Karding’ now over 157,000
Newbie gamers are in for a treat with the power-packed feature of vivo Y16
Karding damage to infrastructure at P23M
House energy committee chair Arroyo bats for cheap electricity
Reignite your passion with the vivo Y35
MOST READ
Angelica Panganiban ‘duguan, sugatang mom’ one week into breastfeeding
LPA enters PAR, may develop into tropical depression
Badoy not with Office of the President, NTF-Elcac, under Marcos admin — solon
Charges readied vs gov’t guard with P290-M deposits
Don't miss out on the latest news and information.