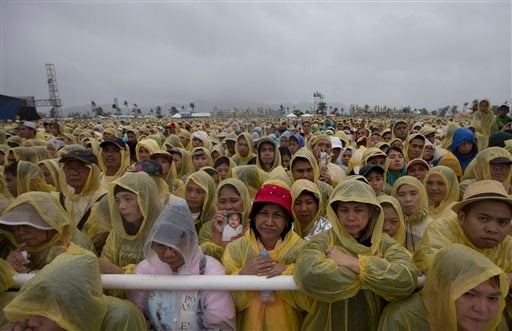 CEBU CITY, Philippines — Pope Francis, whom 1.2 billion Catholics worldwide recognize as their leader, was apologetic to a group of survivors of Super Typhoon “Yolanda” and the 7.2-magnitude quake in Bohol province when he met with them for lunch in the town of Palo, Leyte province, on Saturday.

“He apologized in front of us because he had to leave earlier,” said one of the survivors who had lunch with the Pope, Niza Flores, whose son was killed during the earthquake in Bohol.

Like thousands of others who briefly saw the Pope, or even had a close encounter with him, Flores said she was overwhelmed and could not explain the feeling.

“I can’t understand the feeling. It felt so light. Very unforgettable,” Flores said in a phone interview.

She said each survivor was given the chance to introduce him or herself and kiss the ring on the Pope’s hand.

Prior to meeting Pope Francis, Flores said, she brought 20 rosaries for the Pope to bless along with letters and gifts that the other quake survivors in Bohol wanted to send to the Pope.

Flores said she admired how the Pope was apologetic over not being able to stay longer. The Pope had to shorten his visit to Tacloban City and Palo as Tropical Storm “Amang” got closer and brought heavy rains to Leyte.

Flores said the meeting with Francis took all of 20 minutes, but it would leave a lifetime of memory for her.

On board a Philippine Airlines plane, Francis arrived at 8:45 a.m. and celebrated Mass at 9:15 a.m., which had been originally scheduled for 10 a.m.

He returned to Manila at 1 p.m. after he was advised by pilots that they should leave earlier. Francis was supposed to stay until 5 p.m. in Palo.

A total of 33 persons, including Palo Archbishop John Du and Manila Archbishop Luis Antonio Cardinal Tagle, had lunch with Francis.

“None of us felt bad that we only had a short time with the Pope. Although [the meeting was] brief, we are thankful to be with him and be blessed by him,” Flores said.

Another earthquake survivor, Veneranda Gentallan, told the Inquirer that the mood among the survivors was one of excitement.

“I did not feel saddened at all that it was that brief. What I felt was happiness that I was able to hold his vest and I was able to kiss his shoes,” Gentallan said.

“Although he came like a lightning, I am very thankful I was able to meet and join him for lunch,” she added.

Salome Israel, another earthquake survivor, who lost her right arm, told the Philippine Daily Inquirer they were not even hungry while they waited for the Pope.

“At that time, I didn’t feel I was hungry because I was super excited to see him,” she said.

Israel said among the food served were pan-fried steak and French beans with carrots, steamed grouper in garlic and seafood prawn pasta. Slices of pineapple and watermelon were also served.

Flores said her euphoria has remained for days.

“Although we are already home here in Bohol, the feeling of happiness in seeing him is still there,” she said.