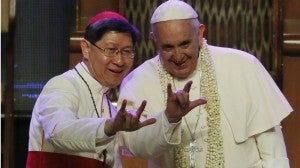 Filipino Cardinal Luis Antonio Tagle, left, shows Pope Francis how to give the popular hand sign for “I love you” at the Mall of Asia arena in Manila, Philippines, Friday, Jan. 16, 2015. AP

MANILA, Philippines–Lessons learned from the visit of Pope Francis in the Philippines should stay even if he has already left the country, Cardinal Luis Antonio Tagle calls on to the people.

“The event is so deep–so deep. There is so much to reflect on, so much to pray over, so much to learn. And it is only in meditation, in prayer, in silence, that we can really get to the depths of the profound meaning of this event,” Cardinal Tagle said in a press briefing in Villamor Airbase Monday.

Cardinal Tagle said people are still affected by the song “Tell the World of His Love” which was sang during the World Youth Day in 1995, during Pope John Paul II’s visit.

But he said it should not just be the song.

“We need to allow that to deepen. So, let us spend  time reflecting on it, the spiritual message and also the missionary message. The centrality of loving the poor; the centrality of appreciating children who are helpless,” Cardinal Tagle said.

He reiterated Pope’s message during his Homily on Sundy in Rizal Park saying “every child should be cherished, should be welcomed. The streets are not for the children. These are not only thoughts but if we ponder on them they will prod us into action.”

“How do we face the inequalities? As he said to the youth ‘think well, feel well and then do well.’ That, I think is the future of this visit,” he added.

Tagle: Pope Francis wants PH visit to focus on Christ, not him