MANILA, Philippines — Pope Francis has left the Philippines for Rome on Monday after a five-day state and apostolic visit, his first to Asia’s biggest Catholic nation.

He left at around 10:12 a.m. via Philippine Airlines (PAL) Flight PR 8010—PAL’s inaugural direct flight to Rome—at Villamor Air Base in Pasay City.

About 400 street children now under the care of foundations also performed as part of the send-off ceremony. They were yelling in unison “Pope Francis we love you”.

The Pontiff’s visit to the Philippines was the second leg of his weeklong Asian tour.

He drew what Filipino officials say was a record crowd of 6 million despite a stormy weather in a historic Manila park where he celebrated his final Mass.

The supposed ‘centerpiece’ of his visit in the Philippines was his trip to Leyte to comfort the survivors of Supertyphoon “Yolanda” (international name:Haiyan), but it was cut short by a few hours due to Tropical Storm Amang (international name: Mekkhala).

Yolanda was the strongest typhoon to hit the world in recent times which left about 6,000 killed in 2013.

On Sunday, Pope Francis said Mass at Quirino Grandstand in Manila, which drew some 6 million people, the biggest gathering for a papal event. This has surpassed Pope John Paul II’s crowd of an estimated 5 million in 1995.

Despite the nonstop rains caused by Amang, pilgrims stayed put in Luneta to hear the culminating Mass and get a glimpse of the Pope. The crowd managed to keep themselves dry with ponchos and umbrellas.

The Pope dedicated his visit to the poor, the youth and families.

Thousands lined up the streets to get a glimpse of the Pope every time he had a scheduled activity.

The 78-year-old pontiff’s visit prompted the government to declare a three-day holiday.

His visit is said to be the biggest security operation in Philippine history with some 50,000 policemen and soldiers deployed. The visits of Pope of Paul VI in 1970 and Pope, and now Saint, John Paul II were marred by assassination attempts. With a report from Associated Press 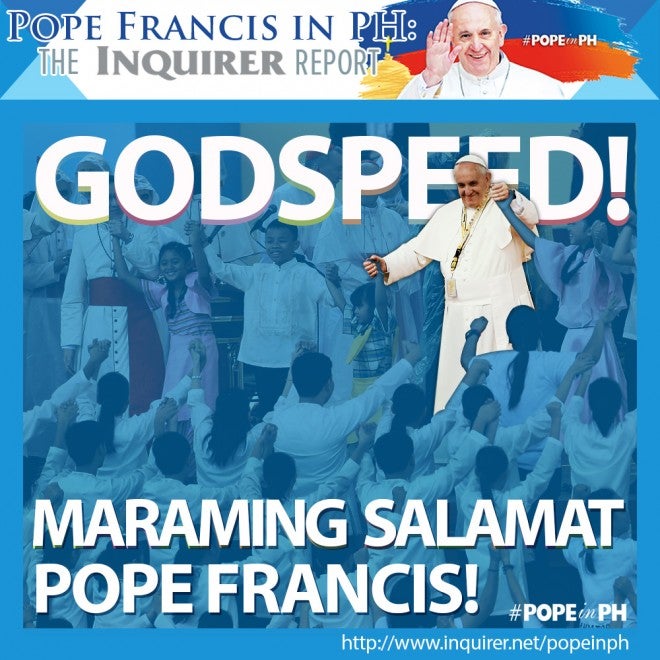