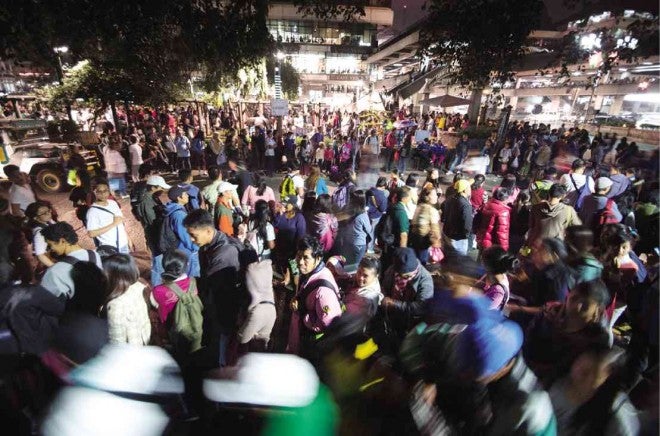 Hundreds of Baguio residents, including commuting tourists, ended up stuck for hours in long queues at public jeepney stands on Jan. 16 due to a second traffic gridlock. Many visitors drove up again to Baguio, some from Manila, which was placed on holiday to accommodate the itinerary of Pope Francis. RICHARD BALONGLONG/INQUIRER NORTHERN LUZON

BAGUIO CITY—With the four-day weekend in Metro Manila, thousands of visitors trekked to the summer capital to enjoy its nippy weather and other sights.

The result was the monstrous traffic jams in most intersections and roads leading to favorite tourist spots like Mines View Park, Camp John Hay and the Lourdes Grotto here.

“We had to seek the help of the police from other units. We also asked barangay tanod to help man the streets in their areas where there were tourists,” he said.

The Baguio tourism office had not yet determined how many tourists visited the city from December to this weekend. The visitors started going down from the resort city on Saturday afternoon.

Mayor Mauricio Domogan has scheduled a traffic summit on Jan. 20 to assess the impact of traffic jams on tourism and to draw up solutions before the staging of the Baguio Flower Festival and the Philippine Military Academy alumni homecoming and graduation, the tourist-drawers in February.

He said the city government intended to change traffic plans, including a number-coding scheme. “We must be prepared because the regular and special holidays scheduled on weekends this year are expected to bring in local and foreign tourists,” he said. Desiree Caluza, Inquirer Northern Luzon