Pope Francis: Be wary of the devil who hides behind pleasures, pastimes 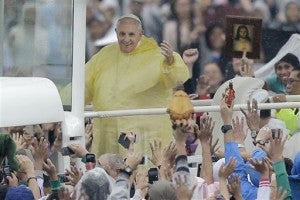 Pope Francis waves at the faithful as he arrives at Rizal Park to celebrate his final Mass in Manila, Philippines, Sunday, Jan. 18, 2015. Millions filled Manila’s main park and surrounding areas for Pope Francis’ final Mass in the Philippines on Sunday, braving a steady rain to hear the pontiff’s message of hope and consolation for the Southeast Asian country’s most downtrodden and destitute. (AP Photo/Bullit Marquez)

MANILA, Philippines—Pope Francis on Sunday warned the millions who attended the Mass at the Quirino Grandstand in Luneta to be wary of the Devil who “hides his snares behind the appearance of sophistication, the allure of being modern, like everyone else.”

“He distracts us with the promise of ephemeral pleasures, superficial pastimes. And so we squander our God-given gifts by tinkering with gadgets; we squander our money on gambling and drink; we turn in on ourselves,” Pope Francis said in his Homily.

The Pope said it is  sin to forget at heart that we are children of God.

“That is why the message of the Sto. Niño is so important. He speaks powerful to all of us. He reminds us of our deepest identity, of what we are called to be as God’s family,” he said.

Homily of Pope Francis during Mass at Luneta