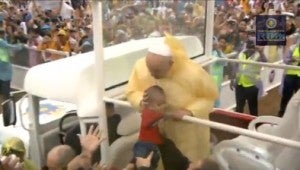 Pope Francis kiss the head of a toddler at the Luneta Park. Screengrab from RTVM

MANILA, Philippines—Really putting the label “The People’s Pope” to form, Pope Francis ordered his driver to stop the jeepney-style popemobile to kiss toddlers who were with the crowd at the Luneta Park.
Pope Francis was aboard his third popemobile, which was fashioned from a jeepney, and went around the historic park on his way to the Quirino Grandstand where he would celebrate the Holy Eucharist that attracted millions of people.

His Holiness first spotted the toddler, whom him parents raised, for the Pope to see. and the next one was an infant.

Pope Francis kissed another toddler as his popemobile made several turns en route to the Grandstand.

The Mass—deemed to be the biggest in decades—was scheduled for 3:30 p.m., but it looks like it will begin earlier.

He’s Lolo Kiko and grandfathers do adore their grandchildren.