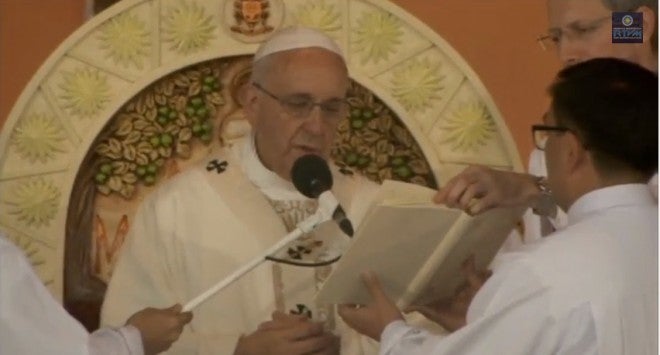 MANILA, Philippines–After weaving through the throng of people in Luneta Park in his jeepney-style popemobile, Pope Francis on Sunday afternoon arrived at Quirino Grandstand to celebrate Mass in one of the world’s biggest outpourings of papal devotion.

Rain fell steadily in Manila in the hours before the Mass but Filipinos are famous for practicing a passionate brand of Catholicism and they turned out in a joyous mood that defied the gloomy skies.

With Pope Francis to concelebrate the Mass are 2,500 priests and 200 bishops from all over the country.

The 78-year-old Pontiff thrilled crowds on his way to the bayside park venue for Mass. Clad in a plastic yellow disposable poncho, Pope Francis waved and smiled to cheering crowds. They chanted “Papa Francisco!” as he arrived in Quirino Grandstand where he repeatedly stopped to kiss babies.

He than arrived to a sea of devoted followers for a Mass expected to last two hours.

People raised their Sto. Niño statues and danced to the rhythm of the Sinulog to mark the Feast of the Sto. Niño. In addition to Sto. Niño statues, the public was also asked to bring candles, which will be lighted as the song “Tell the World of His Love” is sung.

While the Mass will predominantly be in English, the profession of faith led by Pope Francis will be in Filipino and the intercessions in different languages.

Among the readers are a blind person and a student. The responsorial psalm will be given by a youth leader while the vessels of the bread and wine will be presented by three families.

The choir and the orchestra will be composed by a thousand people from different parishes. There will be 5,000 communion distributors and another 5,000 communion ushers.

The Mass will be the culminating activity of Pope Francis’ five-day visit to the Philippines.

His first two Masses were marked by pleasant surprises from the Pope. After his Mass at Manila Cathedral, he and Tagle broke security protocols and left the church to visit street children. At Tacloban, on the other hand, he deviated from his prepared homily and gave an impassioned speech.

“Some of you lost part of your families. All I can do is keep silent, and I walk with you all with my silent heart. Many of you have asked the Lord, ‘Why, Lord?’ And to each of you, Christ responds from His heart upon the Cross,” he told hundreds of thousands of people at the Tacloban airport on Saturday.

Many wept as the raincoat-clad Pope consoled the people of Leyte, many of whom lost loved ones during the onslaught of Supertyphoon “Yolanda” (Haiyan).

The Philippines is the Catholic Church’s bastion in Asia, with 80 percent of the former Spanish colony followers of the faith, and the Pope is a revered figure.

“We are devotees of the Pope,” Bernie Nacario, 53, told Agence France-Presse as he stood amid a mass of people with his wife and two young children near Rizal Park ahead of the mass.

“The Pope is an instrument of the Lord and if you are able to communicate with him, it is just like talking to God himself.”

As groups of friends sang nearby and others burst into spontaneous cheers, Nacario said he was a long-time arthritis sufferer but today his pain had disappeared.

“It is as if the Lord has cured my ailment.”

Organizers said they were preparing for a record-breaking crowd of up to six million. Aerial footage showed masses of people surrounding the park and nearby areas.

If the turnout is as big as expected, it would surpass the previous record for a papal gathering of five million during a mass by John Paul II at the same venue in 1995.