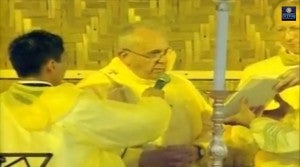 Pope Francis wears a yellow raincoat as he celebrates the mass in storm-ravaged in Leyte. Screengrab from RTV

TACLOBAN CITY, Philippines—Amid strong winds and the pouring rain, Pope Francis celebrated the mass at the Daniel Romualdez Airport in Tacloban City at 9:22 a.m. on Saturday with survivors of the the strongest typhoon ever to hit land.

After emerging from the Philippine Airlines plane that he boarded from Manila to Leyte, the Pope rode the popemobile to greet the thousands of wellwishers who welcomed him.

A modest “sawali” stage was set up where the Supreme Pontiff will address the estimated 120,000 pilgrims, many of whom have been braving the stormy weather in Leyte since Friday just to get a glimpse of the Pope.

Like the people who came to see him, Pope Francis wore a raincoat on top of his vestment for protection as Tropical Storm “Amang” (international name: Mekkhala) continued to bring rains in the province.

His mass in storm-ravaged Tacloban is symbolic at a time he is expected to release soon a rare encyclical on the environment, climate change and ecology.

He will be delivering his homily in this coastal town ravaged by Supertyphoon “Yolanda” (international name: Haiyan). At least 2,474 (of the nationwide 6,300 deaths) were killed in Tacloban, according to the official registered death count. Initially, police feared at least 10,000 dead in Tacloban alone.