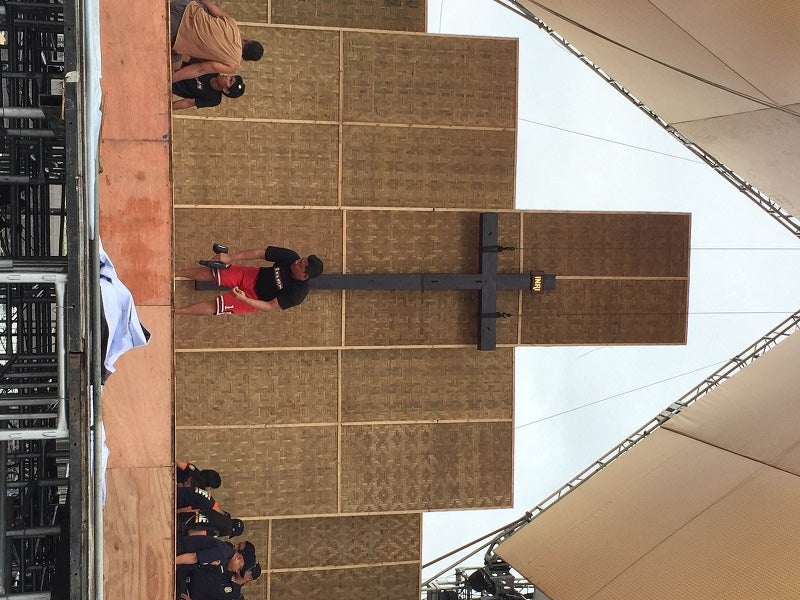 The stage in Tacloban airport where Pope Francis will celebrate Mass is simple and elegant with bamboo mat walls or “sawali.” MARC JAYSON CAYABYAB

TACLOBAN CITY–Pope Francis will celebrate Mass in Tacloban airport on a simple stage made of “sawali” or bamboo mat walls.

The modest stage, surrounded by a bare wall of bamboo mats and roofed with a high arch topped by a cross, was intended to appeal to the pope’s simple lifestyle, Father Amadeo Alvero, spokesperson for the Archdiocese of Palo, said.

“Our pope is a very humble pope. Ayaw nya may picture siya during the Mass. Gusto lang niya si Jesus and Mama Mary,” he added.

The huge cross on the wall of the stage was provided by the Palo Cathedral and is usually used in reenactments of the stations of the cross during Lent, Alvero said.

Dodoy Baredo, the contractor of the materials used, said the stage was designed to look simple yet elegant by chief architect Dan Lichaoco.

Baredo said the arch was heightened to allow more light during the Mass.

Pope Francis is expected to celebrate Mass on January 17 before a crowd of 120,000 people in Don Romualdez Airport, which was severely damaged in the aftermath of Supertyphoon “Yolanda.”

The area is situated on the proposed runway in the Tacloban airport, Baredo said.