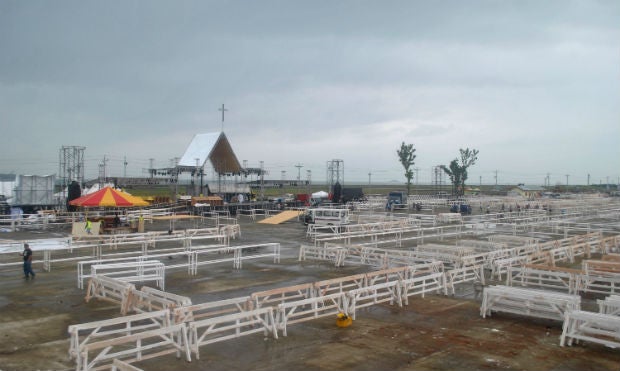 Workers prepare a stage ahead of a visit by Pope Francis in Tacloban Airport, central Philippines on January 13, 2015. The pontiff is scheduled to arrive on January 15 for a four-day visit to one of Catholicism’s Asian bastions. AFP / LITO BAGUNAS

MANILA, Philippines–A tropical storm is expected to enter the Philippine area of responsibility either on Wednesday night or on Thursday, coinciding with the start of Pope Francis’ four-day visit.

The low pressure area spotted Tuesday more than 1,000 kilometers east of Mindanao may develop into a tropical depression when it enters Philippine territory, said a special weather outlook issued for the papal visit by the Philippine Atmospheric, Geophysical and Astronomical Services Administration (Pagasa).

Moderate to heavy rain is expected in Tacloban City and Manila, where the Pope will hold Masses on Saturday and Sunday.

Tacloban and Manila will enjoy generally good weather this week until the weekend, when the tropical cyclone will start to bring heavy rain, said the weather bureau.

On Saturday, during Pope Francis’ visit, Tacloban and nearby Palo in Leyte province will have “moderate to occasionally heavy rains, moderate to strong winds and likely thunderstorms” since the tropical cyclone is expected to move closer to Eastern Visayas, Pagasa said.

Light to moderate rain and moderate to occasionally strong winds will continue to be felt in the area until Sunday. Good weather in the area will return on Monday, it said.

Metro Manila will also have generally good weather during the first three days of the Pope’s visit from Thursday to Saturday.

But by Sunday, when Pope Francis will celebrate Mass at Rizal Park, Metro Manila will have “moderate rain and moderate to occasionally strong winds” as the tropical cyclone moves closer toward the eastern section of southern Luzon.

Light to moderate rain and moderate winds will prevail over Metro Manila on Monday, when the Pope departs for the Vatican.

On Tuesday, Pagasa deployed a mobile radar system to Tacloban to issue specific weather forecasts during the Pope’s visit there.