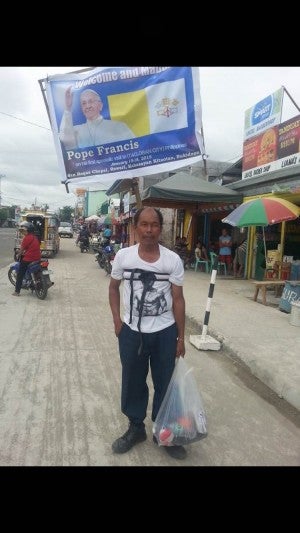 Who wouldn’t take notice of him, when a post is  attached on his back, carrying with it a poster welcoming Pope Francis?

In an interview with DZIQ’s Chona Yu, Adlawan said he walked for 36 days all the way from Bukidnon to Tacloban if only to be personally blessed by the Vicar of Christ, who will celebrate mass  here tomorrow.

He dared to celebrate Christmas and New Year on the road, sleeping in churches or below bridges. He even braved Tropical Storm “Seniang,” which brought flashfloods and landslides in the Visayas and Mindanao regions in December 2014.

And his only way to rest: reading the Bible.

His sacrifice was driven by his prayers of thanks to the Lord for keeping his daughter alive despite having leukemia.

He said his daughter was diagnosed when she was still a baby and has continued to live with the disease now that she is 26 years old.

He is among the one million pilgrims expected to attend Pope Francis’ visit in typhoon-ravaged Tacloban and Palo.

Pope Francis will first visit Tacloban and say Mass at the airport before proceeding to Palo to bless the Pope Francis Center. He will then to go to the Palo Cathedral to light a candle on the mass grave of those who perished when Supertyphoon Yolanda (international name: Haiyan) struck.