Pope Francis arrives in MOA Arena for ‘Encounter with Families’ 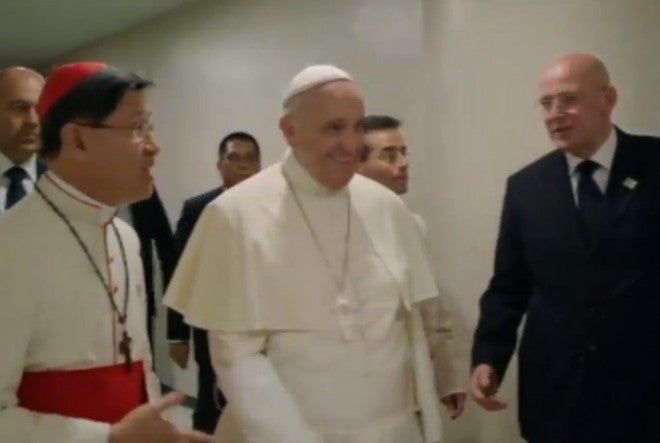 MANILA, Philippines—Thousands of Filipino families from all over the country realized their dream to personally see Pope Francis during the intimate audience with the pontiff at the “Encounter with Families” at the Mall of Asia (MOA) Arena on Friday afternoon.

The pope arrived at the MOA Arena at 5: 23 p.m from the Apostolic Nunciature, the supreme pontiff’s official residence in the Philippines. He was met by cheers and thunderous applause from the families present.

The “Encounter with Families” is the third event scheduled for the Pope on January 16 after meeting with President Benigno Aquino III at Malacañang Palace and celebrating the Mass for the clergy and the faithful at the Manila Cathedral.

According to Manila Archbishop Luis Antonio Cardinal Tagle, the event convened families who are faced with the “three most difficult challenges” present in the contemporary Philippine society: poverty, migration, and disability.

No Mass will be held in the meeting of families, but it will feature Gospel reading and a reflection from Pope Francis. The Pope will then bless the families present.

Tagle said that the pontiff is expected to impart on the delegates “a word of comfort” to help assuage the pain brought by being burdened by the problems they are facing.

He added, “There is a kind of typhoon that doesn’t happen in one place only – it happens everywhere. The Pope will listen and he will give them a word of comfort. But I hope for more: I hope that he, the Pope, will be strengthened in his own faith by these poor people,” the cardinal said in an earlier interview.

The gathering, which has the theme “The Holy Family’s Journey is the Pilgrimage of Every Family”, will mark the Pope’s first time to lead an event of such kind. He is scheduled to attend the World Meeting of Families in September in the US.

Each archdiocese, diocese and prelature sent 100 delegates to take part in the said momentous occasion.