'Does the pope love me?' | Inquirer News

‘Does the pope love me?’ 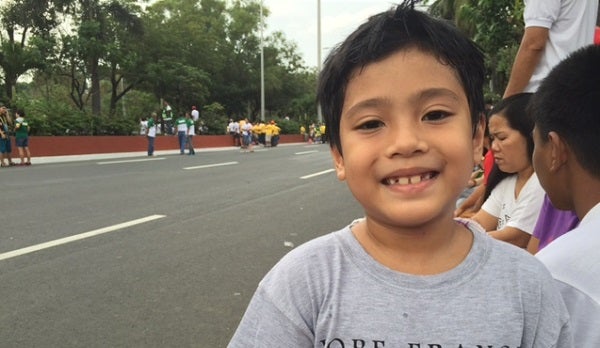 This was the question of a six-year-old child who patiently waited along Roxas Boulevard in Manila on Thursday night just to see Pope Francis during his motorcade going to the Apostolic Nunciature on Taft Avenue.

Sean Isaac grew up in the orphanage until he was adopted by Lisa Pabelico and her husband.

“When he was still in the orphanage, the nuns told me that he was always left behind and no one wants to adopt him,” she said.

But Sean found a true family in Lisa’s home.

Lisa said her adopted son understands the situation and knows that she’s afflicted with a spinal problem.

The Pabelicos were among the thousands of Filipinos who trooped to the streets of Manila to give a boisterous welcome to Pope Francis.

On her part, Lisa felt blessed that she would again see a pope.

“I was five years old when I met Pope Paul VI in Malacañang. Fifty years after, I will be able to see Pope Francis. I feel blessed,” she said.