Pope’s security at Luneta all set

MANILA, Philippines — To manage the crowd of millions that the last day of Pope Francis’ visit is expected to draw, the Luneta Park in Manila ‎will be divided into quadrants that would each accommodate about 1,000 people.

Barricades will set the boundaries of the quadrants although authorities did not reveal how many quadrants there would be to separate worshipers during the Mass to be officiated by the Pope on January 18.

The Luneta will be the Pope’s last stop where he will also lead a candle-lighting ceremony.

The Mass follows an encounter with leaders of other religions and the youth at the Pontifical University of Santo Tomas in Sampaloc.

Interior Secretary Mar Roxas, in a meeting with the media, cabinet secretaries, top police and military officials, said the Luneta and the Quirino Grandstand would be closed to the public on Saturday night and would be opened only at 6 a.m. on Sunday

The Pope’s final Mass will start at 3:30 p.m. to be followed by the candle-lighting rite at 5 p.m.

Authorities expect attendees to exceed the five million who gathered at the Luneta during the 1995 Mass of Pope John Paul II, who is now a saint in the Catholic Church.

Although side streets around the Luneta will be closed, authorities are anticipating that these will be filled with millions of people.

Should the roads be completely blocked with people, Roxas said they might airlift the Pope to and from the Luneta.

“It’s the same Luneta but the crowd will probably get bigger. Not to make comparisons between Pope Francis and the previous pope but this pope has a very, very strong appeal to the masses,” he said.

To deter snipers attempting to harm Pope Francis, the secretary said all tall buildings around the Luneta would be patrolled on top of the policemen to be stationed in the lobbies.

“We want everyone to be able to get close to the Pope and have a fulfilling engagement without sacrificing the safety of the Pope and the people,” he added.

Aisles will be kept open across the park to serve as pathways in case of emergency.

All entrances will be located along the Orosa side of the park, where each entrance will be equipped with scanners and metal detectors.

‎Asked if people would be allowed to go out of the quadrants once they entered the gates, Roxas said yes but it would be at the risk of them losing their place to others.

He also reiterated that no overnight vigils would be allowed in the Luneta, where a security sweep would be conducted Saturday night.

Despite the quadrants, 25 LED screens will be set up around the park to provide a close up view of the Pope’s activities.

In the same meeting, Police Director Carmelo Valmoria, National Capital Region Police Office director, ‎said not all attendees might be accommodated in the quadrants.

“But they will have the chance to see the Pope during his open motorcade to Luneta,” Valmoria said.

Authorities will also not allow vehicles to pass through Roxas Boulevard three hours before the Pope arrives at the park.

The “selfie Pope” will be allowed to interact with the people, however, Roxas said they had asked the Pope through the Vatican ‎to avoid unscheduled stops.

‎Police Director Ricardo Marquez, Philippine National Police Directorate for Operations and the Papal Visit task force head, advised the public to leave their cars and take the train instead. 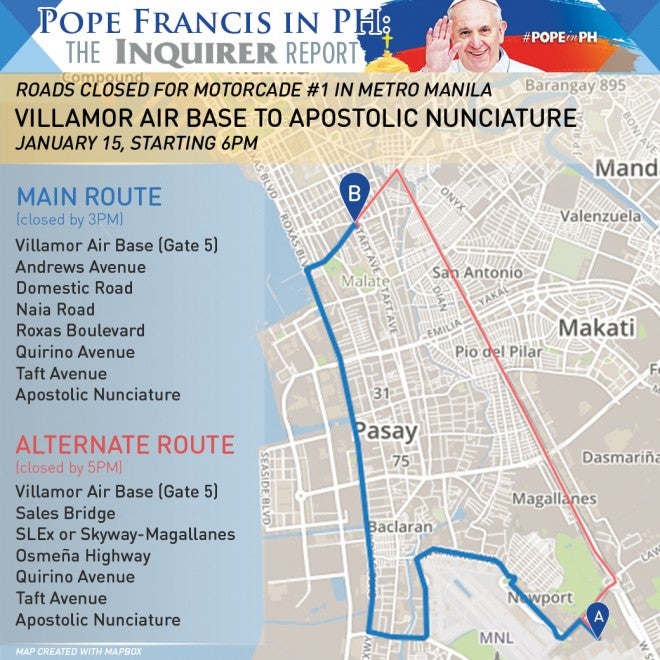 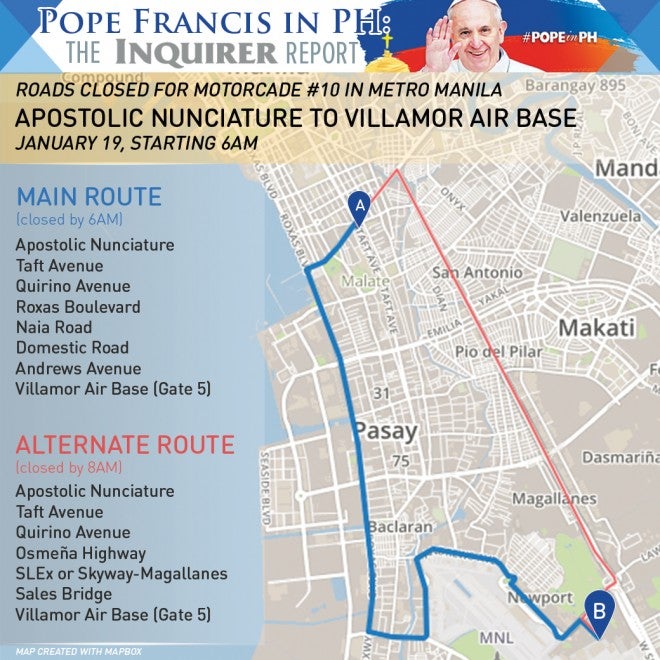