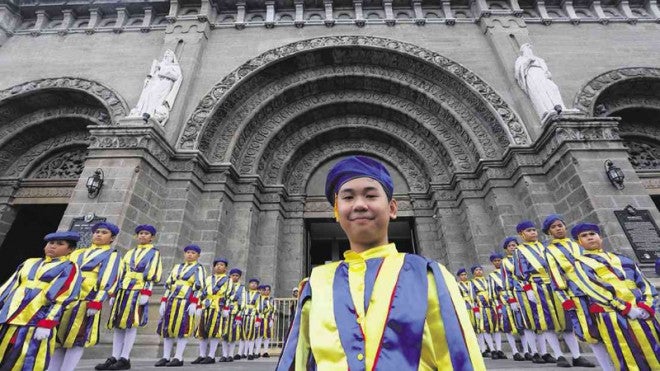 LITTLE SWISS GUARDS Twenty youngsters from the School of Our Lady of Lasalette in San Jose del Monte, Bulacan province, rehearse for the arrival of Pope Francis at the Manila Cathedral. Like the original Swiss Guards at the Vatican, they will perform guard duties for the Pope. JOAN BONDOC

MANILA, Philippines–Security officials will provide air cover and deploy snipers on rooftops in addition to nearly 40,000 troops from the police and the military to protect Pope Francis during his visit from Jan. 15 to 19, officials said on Tuesday.

“We are considering everything, his preferences, his personality, the crowds which will reach millions. That will serve as a challenge to us,” said Chief Supt. Wilben Mayor, spokesman of the Philippine National Police.

All PAF helicopters and available assets will be deployed in Metro Manila and in Palo and Tacloban in Leyte province where the Pope will say a Mass for victims of last year’s Supertyphoon “Yolanda,” said the Air Force chief.

Gen. Gregorio Pio Catapang Jr., chief of staff of the Armed Forces of the Philippines, said snipers would be posted in strategic positions and high-rise buildings along Roxas Boulevard to complement a security force of 6,000 to 7,000 troops and around 5,000 reservists that would work alongside the 25,000 PNP force mobilized for the papal visit.

Close-in security will be provided by the Presidential Security Group.

Speaking at a joint Department of National Defense-AFP traditional New Year’s call, Defense Secretary Voltaire Gazmin said the government had not monitored any specific threat to the Pope, and to the holding of the Black Nazarene procession on Jan. 9.

Catapang admitted that ensuring the Pope’s safety was a big “security challenge.”

“It’s a security challenge in a way but we can do it. We will just make do of available forces. We are in joint forces with the PNP. The PNP will bring in the biggest contingent,” he said.

Catapang said that authorities were more concerned about the millions expected during the Pope’s Mass at Manila’s Rizal Park.

“Our greatest worry is people surge that’s why we are putting up the barricades. The Pope is really very popular,” he said. “Everybody wants to be near the Pope.”

Compared to the state visit of US President Barack Obama last year, the papal visit is expected to draw far bigger crowds.

“It will be more challenging to plan the security. The PNP considers all scenarios as challenging, that is why we adopted a whole of government process,” Mayor said in a press briefing in Camp Crame on Tuesday.

The PNP will secure the immediate vicinity of the venues Pope Francis will visit, while others will be deployed for perimeter and route detail.

Mayor said the PNP was considering everything in planning the security arrangements, including Pope Francis’s preferences. The Pope will not be riding a bulletproof vehicle during his visit here, but will be using a white, open car. Pope Francis is also known for mingling with crowds.

Since Pope Francis is considered a head of state, the PNP considers the papal visit as a state visit and apostolic journey which requires the specific protocol and security appropriate for the head of the Catholic Church.

The PNP urged the people to cooperate. “We ask them to observe the rules and security arrangements, the public will serve as a safety net in our preparations on security and public order,” Mayor said.