US told: Explain surveillance in PH 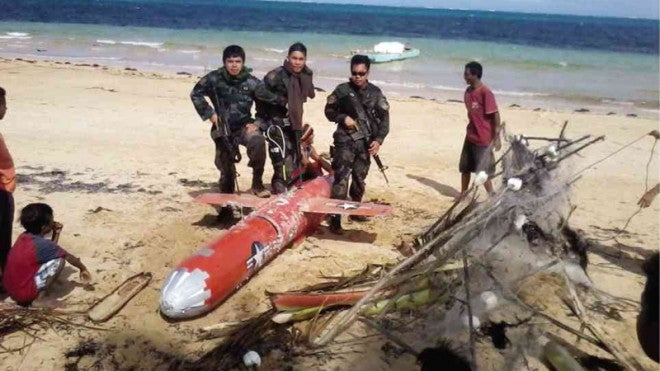 PHILIPPINE soldiers guard what is believed to be a surveillance drone, but which the US government said is an aerial target, which was found in the island town of Patnanungan in Quezon province on Sunday. Photo FROM FACEBOOK PAGE OF PATNANUNGAN POLICE

LUCENA CITY, Philippines—A militant youth party-list group is demanding an explanation from the United States following the discovery of a US military drone in Quezon province, saying it indicated espionage activities by the US government on Philippine soil.

In a statement, Rep. Terry Ridon of Kabataan party-list, a left-wing youth organization, said the US military was acting as if the Philippines was part of US territory. He said it was not the first time a US spy aircraft was discovered in the Philippines.

Ridon called on the US government to explain the deployment of US surveillance drones in the Philippines.

But in a statement, the US Embassy in Manila said the object was actually not a drone but an unarmed aerial target being used for military exercises between the US military and its allies, including the Philippines.

The embassy said the supposed drone was an “expended” aerial target that was launched during military exercises, dubbed Valiant Shield, which took place on Sept. 15-23 last year off Guam.

The aerial target, according to the embassy, does not carry weapons and is not being used for surveillance.

The Armed Forces of the Philippines supported the embassy statement, saying the drone, with serial No. BQ55079, is a Northrop BQM-74E Chukar that is used to simulate enemy missiles and aircraft during naval exercises.

It said the Chukar was washed up on Philippine shores by the ocean’s currents and tides.

“We would like to assure the public that this type of drone is not a surveillance equipment contrary to the claims of some quarters,” the AFP said.

It said no bilateral military exercises between the Philippines and the United States that employed this type of training equipment had been scheduled.

“Foreign military operations in our seas and skies, even in the guise of support, should be condemned rather than tolerated,” Ridon said.

On Sunday, the object believed to be a US Navy drone was found in the island town of Patnanungan in Quezon.

It was the second time the object was found.

On Jan. 6, 2013, a similar object was also recovered in waters off Ticao Island in Masbate province. The US Embassy in Manila, in a statement on the Masbate case, has said the drone recovered off Masbate was actually fired during live exercises in Guam and was only washed ashore in the Philippines.

Senior Supt. Ronaldo Genaro Ylagan, Quezon police chief, said police were waiting for instructions from higher Philippine National Police officials on what to do with the drone, which is still in the custody of the police force in the town where it was found.

Ridon said the Department of Foreign Affairs had already confirmed that US Navy surveillance planes were conducting routine maritime patrol missions in contested areas off the West Philippine Sea.

He said the US military could be exploiting the growing tensions in the disputed area to deploy spy planes and warships in Philippine territory.

Ridon said the US military might be surveying the area to assess the value of its oil and mineral reserves that would be of interest to them as the United States was known for its “aggressive pursuit of economic and political supremacy in the Asia-Pacific in recent years.”

He said the discovery of the spy aircraft also revived the issue on US espionage activities, through the National Security Agency’s Mystic program. The program, Ridon said, was designed for surveillance operations in the Philippines, Mexico, Kenya and the Bahamas.

Mystic is among the espionage programs exposed by whistle-blower Edward Snowden last year, according to Ridon.

US Embassy: Drone found in Quezon unarmed, not used for surveillance

Obama: US will still use drone strikes