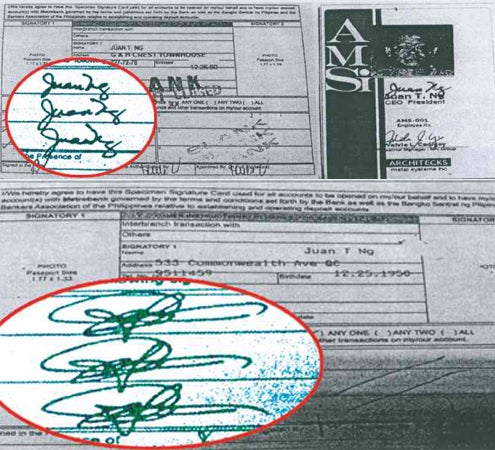 A WHALE OF A DIFFERENCE Specimens of “Juan Ng” signatures (above) that Sen. Jinggoy Estrada allegedly used in bank accounts that received tens of millions of pesos in kickbacks, bribe and commissions, and those of Juan Ng himself (below). SOURCE: AMLC REPORT

The penmanship of detained Sen. Jinggoy Estrada was “very similar” to the handwriting on several checks issued by “Juan Ng,” prompting the Anti-Money Laundering Council (AMLC) to conclude that the senator himself “controlled” three bank accounts under Ng’s name to stash his alleged kickbacks from his pork barrel projects.

Estrada’s alleged use of dummies was reminiscent of the “Jose Velarde” account, which his father, former President and now Manila Mayor Joseph Estrada, opened to deposit billions of pesos from illegal transactions during his short-lived stay in Malacañang. The elder Estrada was subsequently convicted of plunder, but was pardoned by then President Gloria Macapagal-Arroyo.

The AMLC report, a copy of which was obtained by the Inquirer, was officially submitted by government prosecutors at the resumption of the senator’s bail hearing in the Sandiganbayan on Monday despite opposition from Estrada’s lawyers.

In its scrutiny of several bank transactions, the AMLC said Estrada, who has been jailed on plunder charges, had “total credits” of P629.2 million in nine bank accounts from 2004 to 2013.

The AMLC also allegedly found evidence that Estrada received a total of P157.6 million in “commissions or rebates” for funneling his Priority Development Assistance Fund (PDAF) allocations to the bogus foundations of Janet Lim-Napoles, the suspected brains behind the scam.

“Considering all the foregoing, there are indications of money laundering scheme using bank accounts,” the AMLC said in its 90-page report.

“There is, however, a need to conduct further investigation to determine the extent of the subject’s participation and identify the other monetary instruments that were possibly involved in the laundering scheme,” it added.

In its May 28, 2014, resolution, Negradas said the Court of Appeals approved its request to conduct an inquiry into Estrada’s bank accounts and other accounts related to him.

The AMLC said Ng received Estrada’s “commission based on Benhur Luy’s summary of rebates as well as based on bank documents” and deposited more than P57 million to the senator’s bank accounts. Luy is a former Napoles finance officer who has turned whistle-blower.

The senator did not deny knowing Ng, who he said was a legitimate businessman involved in steel roofing business in San Juan City, where Estrada and his father had served as mayor.

A senior government official, who asked not to be named for lack of authority to speak to the media, said the documents only proved that “Ng is actually Estrada himself.”

“Is Senator Estrada just too complacent or is he just that brave? Either way, the checks showed that Senator Estrada used a dummy to transfer his kickbacks from the PDAF scam,” the official told the Inquirer.

It said the businessman used his “conventional signature” on the government-issued identification cards which he used in opening his accounts in Metrobank branches in QC Rotonda Center and N. Domingo, and at the Chinabank branch in Corinthian Hills, all in Quezon City.

But he used his “unconventional signature” in creating his account at Metrobank branch at Green Hills-Wilson in San Juan.

The AMLC investigators also studied and compared the handwriting on several checks which Ng and Estrada issued.

One of the checks, a Unionbank check amounting to P300,000, was issued by Estrada to Ng.

In that check, the words “Juan Ng” which appeared on the line “Pay to the order of,” looked very similar to Ng’s unconventional signature.

Two other checks, which were supposedly issued by Ng on two separate dates in September 2010, bore his two different signatures.

Ng’s supposed handwriting was also different in one of the checks, but it was similar to Estrada’s penmanship in many of the specimen checks.

The AMLC investigators also closely examined six other checks that Ng and Estrada issued in different occasions from 2010 to 2012.

The six checks had Estrada’s signatures and Ng’s unconventional signatures.

But the names listed as payees—Francis Yenko, Metrobank Card Corp. and President Joseph Estrada—were written in a strikingly similar manner.

“Parallel presentation revealed glaring differences in the handwriting and signature of Juan T. Ng… while the latter’s checks bore similar handwriting with that of Senator Estrada’s checks drawn from Unionbank-Green Hills,” the council said.

The council also found out that Ng used two specimen signatures in opening two dollar time deposits in Metrobank, which the businessman both closed in May 2013.

The AMLC said it was “quite unusual for a single person to use two signatures for banking transactions.”

Further, AMLC investigators said Estrada “terminated” or closed four of his bank accounts containing P76.4 million in September 2013 after the Department of Justice and the National Bureau of Investigation started the inquiry on the PDAF scam.

The documents said that cash and checks from Napoles and these foundations ended in the accounts of Ng and Yenko and were subsequently traced to Estrada’s bank accounts. Yenko previously worked in Estrada’s Senate office and is now the head of the General Services Office of the Manila city government, where his father is the mayor.

In June, Estrada was indicted for plunder for allegedly receiving P183 million in kickbacks from Napoles and her dubious foundations for using the senators PDAF. He has been detained since, along with Senators Juan Ponce Enrile and Bong Revilla, who are both facing similar plunder charges in connection with the alleged diversion of their PDAF to ghost projects and kickbacks.

In a statement, Estrada denied he had employed dummies and said the prosecution had “zero” evidence against him. He slammed the prosecution for resorting to “trial by publicity,” accusing it of leaking the contents of the AMLC report to the media.

Continuing their presentation of evidence, the Ombudsman prosecutors caught the senator’s battery of lawyers, including seasoned litigator Jose Flaminiano, flatfooted when they informed the court that they would not be able to present two of their witnesses who were set to appear at the hearing.

Instead, the prosecution brought to the witness stand AMLC financial investigator Negradas. But Estrada’s lawyers vehemently opposed the prosecution’s move to present Negradas and the AMLC report, arguing that the documents had yet to be officially marked during the pretrial conference.

In his brief testimony, Negradas said the AMLC started its probe in May 2013 after a series of articles on the PDAF scam appeared in the Inquirer.

He said the investigation was also prompted by a request from the NBI and the Office of the Ombudsman asking the council to look into the financial transactions of Benhur Luy, Napoles, members of her family, the foundations linked to her and several lawmakers, including Estrada.

The three-member Sandiganbayan Fifth Division, chaired by Associate Justice Roland Jurado, agreed to accept the documents and Negradas’ presentation as prosecution witness, but suspended the proceedings until Estrada’s camp was officially furnished the report.