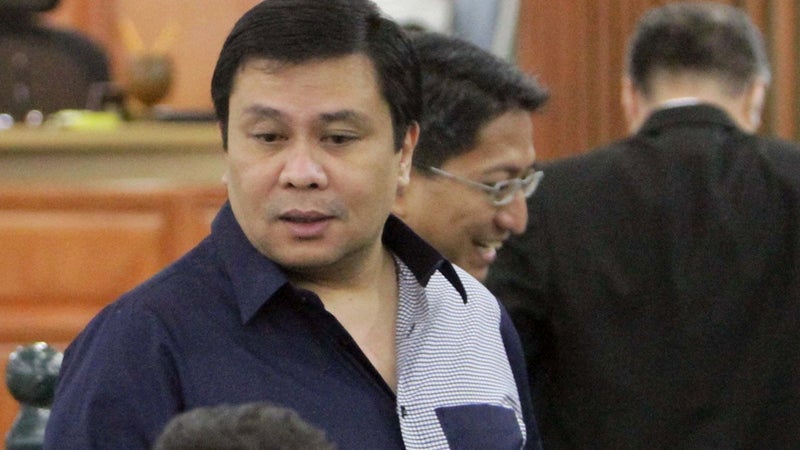 The documents showed the money came from Janet Lim-Napoles, the alleged mastermind of a multibillion-peso scam involving the siphoning off of congressional Priority Development Assistance Fund (PDAF) meant for the poor to ghost projects of her bogus nongovernment organizations (NGOs).

The papers stressed that there were no “direct transfers of funds” to Estrada from the Metrobank accounts of either Napoles or the NGOs—Social Development Program for Farmers Foundation Inc.

However, the documents “identified significant check deposits or transactions” from Napoles or the NGOs to Estrada’s “conduits” and subsequently these amounts were traced to the senator’s own accounts in eight banks.

The papers showed that commissions, kickbacks or bribes in cash totaling P156 million first showed up in Estrada’s bank accounts on Sept. 21, 2007. The cash deposits—and one fund transfer—continued until March, 24, 2010. From then on, check deposits totaling P116.6 million were recorded in the documents until July 26, 2012. The check deposits ranged from P1 million to P10 million.

The documents covered results of a government investigation into Estrada’s financial transactions with Napoles and her NGOs.

The papers constitute part of the evidence to be submitted at the resumption of the hearing on Estrada’s bail petition on Monday at the Sandiganbayan after the full court rejected an offer by its three-member Fifth Division to inhibit themselves from the case. The magistrates had cited political pressure for offering to step aside, according to court sources.

Estrada, along with Senators Juan Ponce Enrile and Ramon Revilla Jr., has been charged with plunder in connection with the alleged diversion of his PDAF allocations to bogus NGOs, ghost projects and kickbacks in schemes purportedly engineered by Napoles. All four are under detention and are undergoing trial.

Nine alleged dummies were named in the papers, but most of the checks from Napoles and the three NGOs were mainly deposited in the accounts of Juan Ng and Francis Yengco.

Estrada has admitted knowing Ng. He described Ng as a respected businessman trading in steel roofing in San Juan City, where the senator previously served as mayor.

Benhur Luy, a former Napoles finance officer, earlier testified in the bail hearings of Estrada that in at least three transactions in 2010, Napoles handed out cash and checks amounting to more than P60 million to Ng purportedly intended for Estrada.

Luy, the primary whistle-blower in the plunder case, previously told the court that Ng was one of the people who collected the senator’s kickbacks, but one of the justices warned that his claims were “hearsay.”

According to the documents, the money deposited in the accounts of Estrada’s conduits came from the Metrobank accounts of SDFFI, AEPFFI and Mamfi. Interestingly, AEPFFI was not included in the list of NGOs that supposedly received portions of the senator’s PDAF.

The evidence showed that the funds from the NGOs were deposited in four bank accounts owned by Napoles and her company, JLN Corp.

The money from Napoles’ and JLN’s accounts was then transferred to six Metrobank accounts and to a Chinabank account under Ng’s name.

Yenko’s Chinabank account was also used as a conduit in the elaborate fund transfers, according to the documents.

The documents identified seven bank accounts owned by Estrada and another one under the name of his former aide, Pauline Labayen, as the recipients of the money. Labayen has remained at large after the Sandiganbayan approved her indictment for plunder, a nonbailable offense.

In what could be the most damning evidence that could pin down Estrada, the documents showed that he received most of his alleged kickbacks in checks.

But a computation of the amounts listed on the documents showed that at least P116.625 million were transferred to Estrada’s accounts though check deposits.

Estrada has been detained at the Philippine National Police Custodial Center at Camp Crame since June last year after he was indicted in the Sandiganbayan for plunder and graft for allegedly pocketing P183.7 million of his PDAF allotments.

During the trial of the elder Estrada for plunder, government witnesses said the ousted President deposited hundreds of millions of pesos in the so-called Velarde account and even signed as “Jose Velarde” in official bank documents.

But businessman Jaime Dichaves, a close friend of the former president, claimed ownership of the controversial bank account.

Joseph Estrada was convicted of plunder, but he was pardoned by then President Gloria Macapagal-Arroyo. He was elected mayor of Manila in 2013.