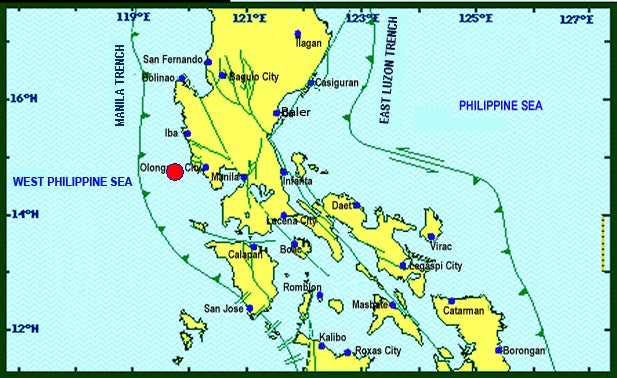 Screengrab of the website of the Philippine Institute of Volcanology and Seismology which shows the epicenter of Sunday’s, January 11, 2015, magnitude-6 earthquake in Luzon.

MANILA, Philippines — A 6.0-magnitude earthquake shook people out of bed when it struck parts of Luzon, including Metro Manila, at 3:31 a.m. Sunday.

Inquirer Libre sports editor Dennis Eroa, who lives in Olongapo City, said he and his son, Matthaus, were roused from sleep by the quake.

“First time ko nakaranas ng ganyang lindol dito sa Gapo,” he added. (That was the first time I experienced that kind of quake here in Olongapo.)

Eroa said he did not notice any damage to their house or community.

The Philippine Institute of Volcanology and Seismology (Phivolcs), through its website, said the epicenter of the quake was 43 kilometers southeast of San Antonio town in Zambales, with a depth of 85 kilometers.

Phivolcs said the temblor was felt as Intensity 4 in the cities of Pasig, Pasay, Manila, Quezon and Makati; San Mateo town in Rizal; and Obando and Hagonoy towns in Bulacan.

Intensity 3 was felt in San Miguel town in Tarlac and Tagaytay City in Cavite.

Intensity 2 was felt in Batangas City and Baguio City.

Phivolcs said it was tectonic in origin.

No casualty and damage to properties have been reported as of posting.