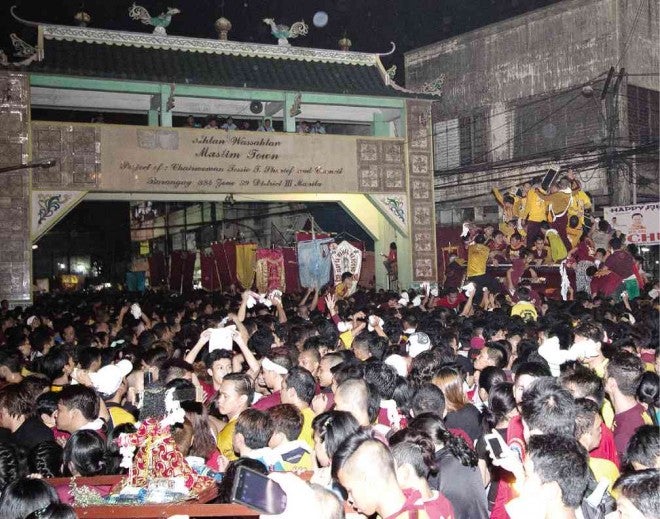 It began and ended with somebody being crushed to death—but will the next Black Nazarene procession be any safer?

Expect tougher crowd-control measures to be imposed by the local authorities in Manila following the two deaths that marred this year’s “traslacion,” a City Hall official handling public safety concerns said on Saturday.

Johnny Yu, director of the local disaster risk reduction management office, said that while the Quiapo Church has full organizational control of the Black Nazarene feast, the city government would make necessary recommendations on how the safety and security issues of the next procession should be handled.

“We will definitely look into the case of the two fatalities and give our recommendations to Mayor Joseph Estrada, who can then relay these recommendations to Quiapo Church. But for next year, expect more executive orders from the city government on what not to do during the (procession) to keep safe,” Yu said.

“Every year, City Hall reminds the public what not to do in order to ensure their safety during the procession. Nevertheless, (my office) will have a post-event assessment, not just of the Black Nazarene gathering but also the papal visit (next week), to see what improvements are needed when it comes to the organization of these massive events,” added Yu.

Renato Gurion, a 44-year-old Nazarene devotee and one of the “official escorts” of the iconic image, was crushed to death by the swarm of fellow devotees while he was on the andas or carriage bearing the statue, just minutes after it left Quirino Grandstand in the morning of Jan. 9.

About 19 hours later, as the procession neared its end at Quiapo Church, 18-year-old Christian Mel Lim met the same fate.

Emergency teams found Lim unconscious just outside the church around 4 a.m. on Saturday, shortly after the image was brought inside. He was last seen alive by his friend and Malate neighbor, 15-year-old Malcolm Castro III, who together with Lim joined the frenzied crowds in welcoming the Black Nazarene back to the church.

Castro recalled that as he and Lim were squeezing their way in, their legs got caught on the rope that went around the statue’s carriage. They tripped and lost their footing. As Castro struggled to get up to avoid getting crushed, he heard Lim screaming in pain beside him.

“The last thing I heard him say was, ‘Ama, Ikaw na po ang bahala sa akin’ (Father, I leave my fate to You),” Castro said, admitting that he felt guilty over his “failure” to save his friend.

The two young men were at the traslacion together with family, friends and neighbors as part of a group of devotees who call themselves Anak ng Poong Hesus Nazareno (Children of the Lord Jesus of Nazareth ).

Lim’s elder brother Mark Denise, 19, said one of their uncles began looking for the victim after three hours of waiting for him to return at their designated meeting place behind the church. The uncle later learned from rescue workers that a man in an Anpon shirt had been brought to the hospital.

But despite the tragedy, Lim’s relatives said it would not change their devotion to the Black Nazarene, noting that they keep smaller replicas of the image at home which they bring to Quiapo every Sunday.

“The Black Nazarene has helped our family a lot. He completely cured one of my grandsons (Lim’s cousin) who had leukemia when he was just 13 years old in 2010,” said Lim’s grandmother, Imelda Mariano, 63.

“Our neighborhood’s devotion also keeps the youth from vice,” she added. “We just have to accept that (Lim’s) death was an accident.”

“We’ve been telling people: ‘Brother/sister, please follow our instructions when climbing up the carriage because it is our job to ensure your safety,’’’ Sanding said. “What people don’t realize is that, as the Black Nazarene’s official escorts, our lives are at risk the minute we start the traslacion.”

A funeral Mass for Gurion will be officiated by Msgr. Jose Clemente Ignacio on Jan. 17 at Quiapo Church at 1 p.m., to be followed by his burial at La Loma Cemetery, Sanding said.