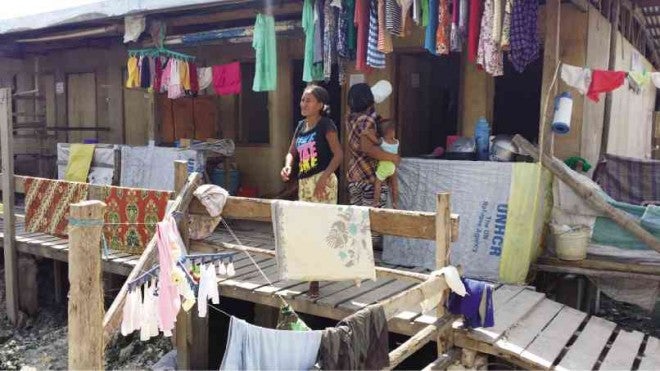 A BADJAO woman at the Masepla Transitory Site, where evacuees in bunkhouses are without electricity and with barely any potable water. JULIE S. ALIPALA/INQUIRER MINDANAO

ZAMBOANGA CITY—From the frying pan to the fire.

This was how evacuees feel about being moved from a government shelter to a supposedly transition site in this city.

At the Masepla Transitory Site in the village of Mampang, 900 families of the Sama-Badjao tribe languish in living quarters barely fit for human habitation.

“They (government officials) told us that we are going to have a better place to stay,” said Jahira Mandane, a mother of five and one of thousands of city residents displaced by the terror attack on the city by followers of Moro leader Nur Misuari and the military operation that followed it.

“Yes we are staying in a bunkhouse here,” said Mandane. “It’s better than a tent, but how could we survive here?” she said.

Mandane said people moved to the 23-hectare transitory site in Masaple, some eight kilometers from downtown, have no source of livelihood and food is scarce.

Another woman’s description of the Masepla site is more telling. The place, said the woman, is “cursed by God.”

“Everything turned to worst,” said the woman evacuee, who asked that she not be identified.

“We eat once a day, there’s no money. Water is scarce and there is no electricity,” she said.

The situation in Masepla had driven many families to “escape” and return to the streets where they can eke out a living, she added.

Ramada Jose, a volunteer for a nongovernment organization, said she heard of the Jan. 2 incident when at least 60 families fled the transitory site and returned to the grandstand of the Don Joaquin F. Enriquez Memorial Sports Complex, the official government evacuation site.

“They were starving,” Jose said of the families who fled.

The evacuees are among the thousands who lost their homes during the war between government forces and followers of Misuari more than a year ago.

“We are aware of the conditions there,” she said, adding that steps are being taken to address the problem.

Rojas said lack of electricity is being addressed, admitting that a generator installed in the site could provide electricity for only up to four hours a day.

“The livelihood program is not stable because of the lack of electricity,” Rojas said.

Mayor Ma. Isabelle Climaco-Salazar also acknowledged that electricity is one of the main problems in Masepla.

She, however, blamed the local electric cooperative. She said the local utility had failed to prepare a plan to justify the release of funds for electrification by the Department of Budget and Management (DBM).

“It is the (Zamboanga City Electric Cooperative or Zamcelco) that needs to prepare the plan so that they can download the funds from DBM,” Salazar said.

She said the city government is negotiating with the Department of Social Welfare and Development (DSWD) for at least P50 million in additional funding.

She said the money would be used for “transitional expenditures” like on water, electricity, road repair and transitory needs of our evacuees.”

“Why will we give them power if they cannot pay the electricity?” said Ledesma.

He said for every month that the P6.9 million is unpaid, power suppliers are charging P130,000.