MANILA, Philippines—Detained Senator Jinggoy Estrada has appealed to the Sandiganbayan to set the amount of his bail in the plunder case over the pork barrel scam as he was not a flight risk.

In a comment to the prosecution’s opposition on his motion to fix bail, Estrada reiterated that the court should grant his bail because he will not flee the charges in view of his official and social stature as senator. 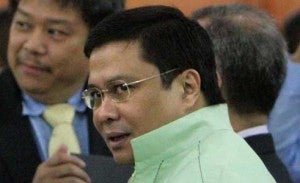 “Even assuming that the prosecution is able to show that the evidence against him is strong (only hypotethically for the purpose of this motion), he is nonetheless entitled to bail because he is demonstrably not a flight risk,” Estrada’s comment said.

“The theory is that if the evidence of guilt is ‘strong,’ the risk of flight increases. However, the theory does not hold in the case of Senator Estrada, whose ‘official and social standing and other personal circumstances’ eliminate the risk of flight,” it added.

“If Senator Estrada remains in detention despite not being a flight risk, then his detention becomes a penalty rather than a mode of ensuring his presence at trial,” the motion added.

Estrada also denied the prosecution’s claims that his motion to fix bail intends to derail the bail hearings and to stall his imprisonment for plunder.

He said his motion to fix bail was not given a hearing and thus did not delay the ongoing proceedings.

In its opposition, state prosecutors said Estrada only wanted to delay being imprisoned for plunder.

“Estrada knows for a fact that the incriminatory evidence against him is already snowballing even at this early stage of the bail hearing, and things can only get worse from here, and so, like any person caught in a trap, his only recourse is to forestall the inevitable for as long as he could,” the prosecutors said.

The panel also said Estrada’s motion has no legal grounds, saying that “this bizarre proposition… which essentially seeks to pre-terminate and improperly abbreviate the ongoing bail hearing, has absolutely no merit.”

Estrada faces plunder and graft charges for his alleged involvement in the pork barrel scam, the purported diversion of senators’ Priority Development Assistance Funds (PDAF) to ghost projects for kickbacks.